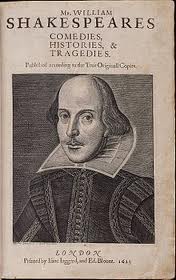 My long time followers know two things about me. I love listening to podcasts and am in the middle of earing my master’s in humanities, ever hopeful to teach my favorite subject Shakespeare. So when one of my favorite podcasts Strange Frequencies Radio (SFR) decided to do a show about the Shakespeare authorship debate I eagerly joined in the live chat room.

For those of you who are unfamiliar with the Shakespeare authorship debate let me explain.  Critics of Shakespeare as an author believe that William Shakespeare the actor did not write the plays and poems attributed to him. This idea is not widely held by most scholars, but those who do are rather vocal about their views. This was shown to be true during the live broadcast of SFR Sunday afternoon. Wow the Oxfordians in the chat room were almost shouting! FYI they call themselves Oxfordians because they believe the 17th Earl of Oxford, Edward De Vere, is the true author. The “evidence” for this is comprehensive, ranging from De Vere’s aristocratic knowledge of the upper classes through to his education and the similarities between his poetry and Shakespeare’s (there isn’t any). As regards to the authorship of Shakespeare’s plays and sonnets, it is believed by the Oxfordians that Edward wrote these under the pseudonym of Shakespeare, both to avoid breaking a voluntary convention against aristocrats publishing poetry (there wasn’t one) and plays and to escape the consequences of the subject matter he was writing about.  It is suggested that the character of Polonius bears a striking resemblance to De Vere’s father-in-law. Anyone who has either read the play or watched it probably thinks Polonius bears a striking resemblance his or her father-in-law or at least we all have that one uncle…

Professor and humanities skeptic (I want that title!)Eve Siebert was SFR’s guest. She was on to debunk the arguments for someone else as being the author of the works of Shakespeare. No sooner had she started talking when someone in the chat room rudely typed “Wrong!” over and over again. He then rudely suggested the hosts “get a real scholar” on the show. Not only was this extremely rude and disrespectful it was obvious he could not handle his beliefs being debunked and wanted to only hear from someone whose believes were the same as his. I have to hand it to Bobby, one of the hosts of SFR, for he not only called out those in the chat room who were typing rude remarks, he dared them to call in after Professor Siebert was finished so they could tell their side. And to the doubters credit a “real Oxfordian scholar “did call in. As expected his arguments were weak; he talked about the relationship between De Vere and his father-in-law. As he rambled on his voice became angry not because anyone was arguing with him, but because the two hosts were asking follow up questions.

This post is not a case for Shakespeare, though in the future if you want I will talk about the various claims made by the Oxfordians, yet I feel compelled to talk about one. The one that all doubters of Shakespeare point to; that an uneducated actor could not have possibly written such great works. This, to me, is a disrespectful and ugly argument. It has always bothered me when those without degrees are looked upon as some how not as smart as those with degrees.

But before I do I want to share a couple of thoughts I had during the show.

For years I felt inadequate because I lacked a college degree. I made up for it by being well read. I collected and read books on a wide range of subjects. I felt by reading I was making up for what I lacked in an education. Perhaps Shakespeare felt the same way. After all many playwrights of his day were college educated. Perhaps Shakespeare was also well read. After all, books come in real handy when doing any kind of research, as I am about to prove.

This last spring I wrote a paper titled What happens in the woods stays in the woods. It was a critical look at the play A midsummer night’s dream. In the paper I compared Greek mythology to the characters found in the play. I wasn’t sure what my hook would be until I did some research on centaurs. I wanted to see if I could figure out why the character of Bottom was depicted as having an ass’s head/ male body instead of the usual horse body/male head. My research paid off. I found out that Chiron, the wisest of the centaurs, is described as “having thoughts too great for man”. Does this sound familiar? It should if you have seen or read the play.

After Bottom is once again transformed into a man he declares ““I have had a dream past the wit of man to say what it was”. “ The eye of man hath not heard, the ear of man that not seen, the hand of man is not able to taste, his tongue to conceive, nor his heart what my dream was”. It would seem Bottom also had thoughts too great for man. Bottom couldn’t even explain them with any clarity (he was an ass not an centaur after all).

It was clear the playwright had Chiron’s wisdom in mind when he created the character of Bottom. In fact the majority of the action in the play requires that all of the characters believe they are acting wisely thought the opposite is true. I found my hook within 15 minutes of doing research and did so using books I collected before I earned a degree.

So what does this have to do with Shakespeare? Well, let’s say instead of writing a paper I decided to write a play and said play was to be based in ancient Athens because I just happened to love Greek mythology having studied it in grammar school. How would I go about it? Perhaps I would pick up Arthur Golding’s 1567 translation of Ovid’s The Metamorphoses and look for inspiration and find it in section Six titled, The Less Important Myths. Why this book? Because it was widely regarded during Shakespeare’s day and because this is where I found the mention of Chiron and his being wiser than men. It took my only 15 minutes, but perhaps Shakespeare had this in mind the whole time when he sat down to write. Maybe it didn’t even take him 15 minutes. The idea may have been planted in childhood.

It would not have taken a college education to write this play, just a natural talent for writing, love of Greek mythology and memories of being taught about them in grammar school.

If you don’t believe William Shakespeare was a writer, go ahead, give it your best shot. Show me your proof. But remember, I have reference books and am not afraid to use them!

29 thoughts on “So, you think you’re smarter than Shakespeare?”