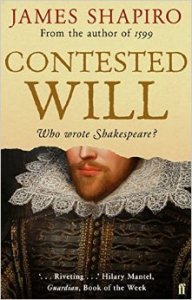 So begins a semi-satirical argument made in 1848 by Mosheim Schmucker in his book, Historical Doubts Respecting Shakespeare: Illustrating Infidel Objections Against the Bible (his publisher rejecting the shorter title of Oh Come on, seriously? because all great late 1800 book titles were required to be long and pretentious). Unfortunately for Schmucker, and to Shakespeare scholarship in general, his book was taken far too seriously.

The book was written as a response to another titled, The Life of Jesus, and the burgeoning “Higher Criticism” movement that inspired it. The phrase “Higher Criticism” described the study of the origins, date, composition, and transmission of the books of the Bible in order to separate fact from fiction. David Fredrick Strauss, one of the scholars who employed this method to the New Testament, came to the conclusion that there was no “supernatural, divine Christ, no miracles and no resurrection of the dead”. This did not sit well with the clergy (as one can easily imagine) and so Schumuker took it upon himself to write a response. The results were not what he had expected and sadly, we’ve been subjected to the 2011 movie Anonymous because of it.

Schumuker, a historian and Lutheran pastor, decided to parody Strauss and his like by writing a book using the same arguments to determine if Shakespeare ever existed. Schumuker never doubted Shakespeare’s existence and assumed his readers would see the book for what it was intended to be; a satirical rebuttal to the argument that given the lack of historical data and contradictory stories surrounding Christ, we must conclude there was no Christ. He wanted his readers to see through Strauss’ argument using the “absence of evidence argument”. What ensued was not what he expected; it began the serious study of the authorship question that still rages today. Ironically, those seeking to question Shakespeare’s authorship used Schumuker’s book as their bible; using his arguments as talking points. Though the book is no longer regarded as the ultimate guide to the authorship questions, the arguments he presented are still in use today. Thanks to Schumuker and his obvious lack of satirical skills, the authorship question did not die a natural death. One could say he resurrected a question that was all but forgotten and gave it new life.

I found this story absolutely intriguing. It is one of several stories James Shapiro offer us in which we learn how and why the authorship question remains a topic of interest and debate. I learned that Mark Twain came to question Shakespeare as an author because in his later years he was convinced that all writing is consciously and subconsciously autobiographical. Twain was famous for his “truth” in fiction, but as he aged he began to believe that all writers expressed themselves in their works and that no one could write about things that they themselves had not experienced. I have to wonder if anyone pointed out to Twain that he was not a time traveler yet was able to write a lovely book on the subject.

A better-suited title for the book, Contested Will Who wrote Shakespeare? would’ve been Contested Will Why people deny Shakespeare, as this is what Shapiro offers us. It is the history of doubt and what led other wise intelligent scholars, writers, and armchair historians to question whether there ever was a playwright named William Shakespeare. I read it in one day as I could not put this book down. It is one of my favorite books regarding the study of Shakespeare.

I have to commend Shapiro for his even-handed style in which he presented these people and their stories. It could have been so easy for him to scoff and make fun of them, but instead he presents their cases in a respectful and very well researched manner. Yes, once in awhile he does ask a question or makes a remark but this on ensures that the book is lightheaded tone, rather than a dry academic read or catty argument against the Anti-Stratfordians.

Make no mistake, this book is about the authorship questions but it is much more; it is a fascinating look into historical scholarship and offers modern readers the chance to see the other side of literary debate. Who knew this all really started with one woman’s frustration with not being taken as a serious scholar and took off when a pastor overestimated his comedic writing skills? Thank you Mr. Shapiro for enlightening us as to why people deny Shakespeare.