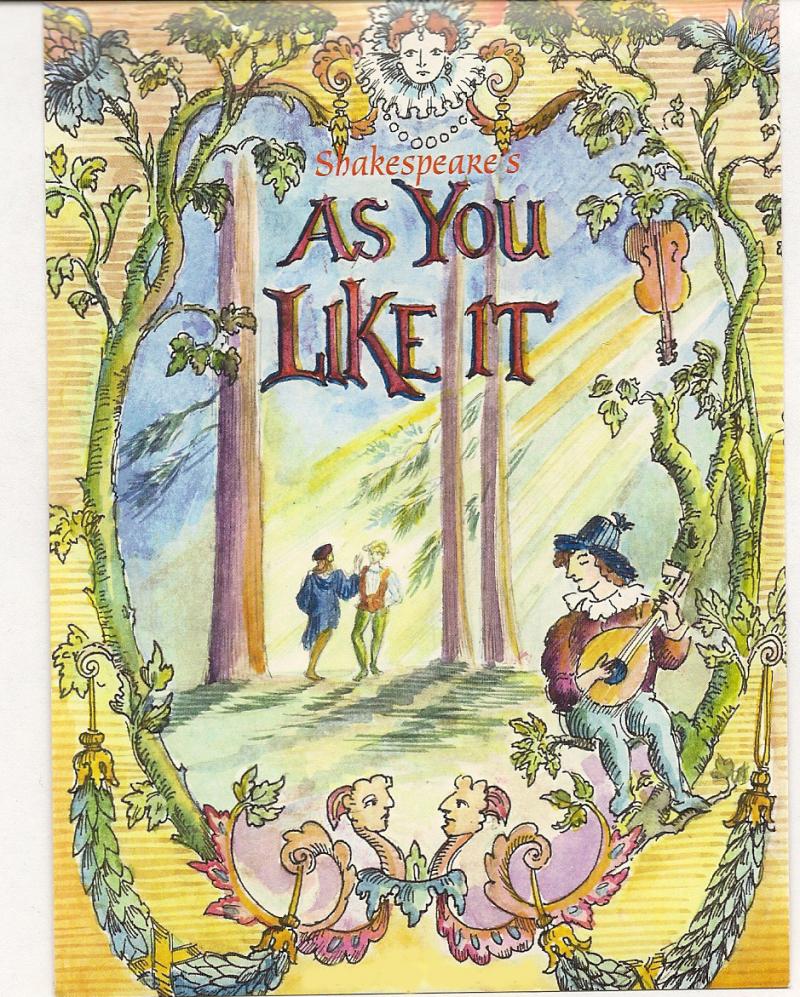 Pastoral play: a literary work dealing with shepherds or rural life in a usually artificial manner and typically drawing a contrast between the innocence and serenity of the simple life and the misery and corruption of city and especially court life. https://www.merriam-webster.com/dictionary/pastoral

Location: The Forest of Arden, France

Some years ago, Duke Senior was banished and usurped by his brother, Duke Frederick, and now lives in the Forest of Arden, with his noblemen. Senior’s daughter Rosalind has been allowed to remain at court with Frederick’s daughter Celia, but she incurs Frederick’s displeasure, (she is becoming more popular than he) and is banished. Celia decides to run away with her, and they leave for Arden with Rosalind disguised as a man, and accompanied by Touchstone, a clown. Rosalind changes her name to Ganymede, and Celia to Aliena (Ganymede is a youth thought to be so lovely by the gods that they allowed him to live in Olympus as their cup bearer. Aliena in Latin means foreign; to be from somewhere else).

Before they leave, Rosalind falls in love with one of the sons of Rowland De Boys—Orlando, who is ruled and hated by his elder brother, Oliver. Orlando foils Oliver’s plan to have him killed in a match against the Duke’s chief wrestler, Charles, by soundly defeating the champion.

Orlando is then advised by his servant Adam that he must leave the court and escape from his brother’s wrath so the two flee to Arden. They are starving when they encounter Duke Senior, who takes them in, delighted to discover that Orlando is the son of his old friend Sir Rowland.

Rosalind and Celia observe two shepherds, Corin and Silvius, talking, and learn of Silvius’s love for Phebe, a shepherdess. They buy pastures and herd from them, and decide to live as shepherds. Touchstone spends much time in the company of Audrey, eventually wooing her (though not by honest means). Jaques, a melancholy nobleman of Duke Senior’s company, becomes fascinated by Touchstone, and spends much time talking to him. Later in the play, Phebe falls for “Ganymede” which causes confusion between “Ganymede” and Silvius, until Rosalind reveals herself to everyone.

Orlando leaves love messages for Rosalind all over the forest, and for all to find. Both Roslind and Celia find the badly written poems, and though Roslind is madly in love with Orlando, she is able find humor in his writing. When the two girls meet Orlando again, ‘Ganymede’ persuades Orlando to treat ‘him’ as his Rosalind, so that he may practice wooing.

Frederick, believing Celia and Rosalind to have fled with Orlando, sends Oliver after his brother, threatening to take the De Boys’ lands if Oliver returns without him.

Oliver is saved from a lion, and a snake by Orlando, and the two brothers are reconciled. Oliver relates the story to the two girls, and having repented finds that Celia has fallen for him, and he for her.

As events push Rosalind to a point that she must reveal herself, she gathers everyone together so that as one they learn the truth. There is much confusion at first but like all good comedies, everyone is satisfied. Phebe agrees to marry Silvius. Rosalind is reunited with her father, and marries Orlando. Oliver marries Celia. Touchstone marries Audrey.

The third son of Sir Rowland, Jaques (yes there is a second character named Jaques), arrives to announce that Frederick had intended to invade the forest with an army, but on his way he met a religious man who converted him from his harsh ways, and he has now begun a religious life. Duke Senior is given his land and title back, allowing the characters to return to “civilization”.

You would be forgiven if the theme of court vs. country life reminds you of A Midsummer’s Night dream. Yes, Shakespeare repeats the contrasts between civilization and those who live beyond the court. As with AMSND, the actions in the forest depict a dream like quality, where people are not necessarily as they seem, and love is shown in its many forms. There is the passionate love between Orlando and Rosalind, both of whom at one time swear they will die without the other. Then there is the unrequited love Silvius has for Phebe; the lustful “love” Touchstone has for Audrey; the mature love between Oliver and Celia, and the love between family members.

This play is considered to be a pastoral comedy because Shakespeare employs the conventions of pastoral literature. The pastoral, the lost world, or forest, is set in a simple, rural environment, which becomes the idea image of all things desirable to honest people. To Touchstone, the one character that is dishonest in love, finds the setting “tolerable”. But Duke Senior, who fled a corrupt court, finds solace in the forest and agrees to return to the court knowing he can take what he learned in the forest back home. This is not unlike what happens today when we return from a life changing vacation. In fact we can look at this play as a type of vacation from everyday life. The forest gives the characters an opportunity to revaluate what and who is important to them, thus allowing them to return to court life with a fresh understanding of themselves and those around them. Yet they cannot return to the court until the corruption has been removed.

If the court is corrupt, the forest represents openness, tolerance, simplicity, and freedom. The traits of the court vs. the forest are found in the traits of those who live in the opposing settings. The court is the natural setting of Oliver and Fredrick, while the forest is the natural setting for the lovers who find themselves able to do and say that which they might never in the court. Which brings us to Rosalind and Celia; the women find not only love, but also their voices.

Much has been written about Rosalind. She is a favorite among audience and critics alike. Most “women of Shakespeare” lists find her at the top (although Beatrice is my favorite) because of her wit, self-awareness, and ability to subvert the limitations that society imposes on her as a woman. Without hesitation she disguises herself as a young man in order escape with Celia without fear of assault. She can only buy a piece of land for the cousins as a man, and as a man she tutors Orlando on the ways of love. There is great comic appeal to Rosalind appearing as a man, yet some modern female audiences members pose this question after seeing the play for the first time; “Why does Rosalind keep up the counterfeit for so long?”

The obvious answer would appear to be that in order to keep the comedy and plot going, Rosalind must continue to act the part. Yet, there is more to her disguise than appearance alone.

Shakespeare’s audience would have felt a measure of unease at the sight of a women taking charge, buying property and wooing a man. In Shakespeare’s time, the gender roles were strictly enforced and any woman acting out of her assigned role would be seen as wicked. Shakespeare is mindful of this and uses the disguise to mask her gender while allowing her boldness and intellect to shine through. But Shakespeare doesn’t completely mask her gender as some of her best lines happen when she is alone with Celia, gently reminding the audience that women can be and are witty even as they make fun of themselves.

Celia: Cry “holla” to thy tongue, I prithee. It curvets unseasonably. He was furnished like a hunter.

Rosalind: Oh, ominous! He comes to kill my heart.

Celia: I would sing my song without a burden. Thou bring’st me out of tune.

Rosalind: Do you not know I am a woman? When I think, I must speak. Sweet, say on.

As much as audiences love Rosalind, it is good to remember that it is Celia who makes the argument that the two must leave the court. Celia, who is not banished by her father, choses her beloved cousin over her father and easy court life. Celia is the voice of reason when Rosalind is unable to think clearly. Together they demonstrate a new kind of woman, one that would be unfamiliar to Shakespeare’s audience. Which is why she continues to play the part until forced to reveal her true identity.

We’d like to believe that this strong self-reliant woman is common in our modern world, that the lengths Rosalind has to go in order to protect herself is foreign to us. But as we know, this is not the case, and why this play, these two characters, are important to us today. They are a good case examples of why we still need Shakespeare.

Many young women today might be shocked that up until the late 70’s women were not offered credit cards, and that banks declined home loans to single women. My own mother once tried to close a store credit card account only to be told that “her husband would have to call to close it”. In the last few months we have witnessed female senators being interrupted, and in one case, told she cannot ask a question of a hearing witness. In February of this year, the Senate voted to silence Elizabeth Warren for quoting Coretta Scott King, yet her male counter-parts quote famous people all the time.

Yes, we have come a very long way from the days of strict gender roles, but the underling attitudes towards bold, decisive women have not. Strong females in the work place are labeled with words like, “bitch, cold, calculating”, while men who hold the same position are labeled “driven, hard-working, and displays strong leaderships skills”. We may not have to dress like men to buy homes or share power in a relationship, but we are painfully aware that we are mere players on a man’s stage. We need Rosalind to remind us of who we can and should be. This beloved character of Shakespeare is a wonderful role model for young women-minus the male attire.

Works Cited
Sparknotes As You Like it Plot summary