As you know 2016 marks the 400th anniversary of Shakespeare’s death. What we don’t know is the exact cause his untimely death. The man was 52 years old and from all accounts seemed to be in good health. Yes, he did retired early, but given that he was a wealthy man this shouldn’t be all that surprising. Perhaps he was burned out; London or the stage’s allure may have finally run thin. The quiet country life he escaped from as a young man may all of a sudden seem like the ideal place to escape to.

Shakespeare’s cause of death remains a mystery. What little factual information we have of his death comes from an entry in the diary of John Ward, the vicar of Holy Trinity Church in Stratford (where Shakespeare is buried). In the diary, Ward notes that “Shakespeare, Drayton, and Ben Jonson had a merry meeting and it seems drank too hard, for Shakespeare died of a fever there contracted.”

We know people just don’t catch fevers from drinking, unless the drinks in question contain some type of infectious bacteria, and given the hygienic practices of the day, this could be a possibility. Yet we know that Shakespeare amended his will only a month before his death. Is it possible Shakespeare knew he was dying?

Like with so many other “Shakespeare mystery’s” some scholars think that yes, not only did he know he was dying, they go on to suggest this is why he retired early and amended his will. We will get into another possible reason for this sudden change in a moment.

But first, let’s look at some other possibilities for his early death, or as some might say, death conspiracies.

Shakespeare’s own son –in- law John Hall is purported to claim:

I have formed the opinion that it was more likely than not in the nature of a cerebral hemorrhage or apoplexy that quickly deepened and soon became fatal. There are three reasons for this. Firstly, the hurried reconstruction and inter-lineated clauses of the Will not allowing time for it to be copied afresh before signature; Secondly, the earliest and clearest impressions of the Droeshout frontispiece of the First Folio show outstanding shadings, suggesting marked thickening of the left temporal artery– a sign of atheroma and arterio-sclerosis; and thirdly, such a termination is quite common in men who have undergone such continuous mental and physical strain over a prolonged period as our actor-manager-dramatist must have been subjected to throughout his, undoubtedly, strenuous career. Richard Burbage who daily shared the same theatrical life, himself died of such a seizure after twenty-four hours illness [in 1619]”

It has to be pointed out that of all people, Hall had the most to gain from a sudden death explanation. Hall was not only Shakespeare’s son-in-law; he was  the family doctor. To note that the playwright’s sudden death was caused by “mental and physical” strain” may have been an attempt to absolve himself of his father-in-laws death. He may have been trying to deflect blame in order to save his own reputation.

As I said earlier, Shakespeare amended his will a month before his death. This fact has led some scholars to believe the man was in very poor health and at death’s door. They point to his “shaky” signature as proof of their claim. The problem with this is two fold. One; Shakespeare’s signature always appears shaky, and two; Shakespeare’s youngest daughter had just become engaged, causing Shakespeare to adjust what he felt she was owed and to include provisions for any future children she may have.

Author Simon Andrew Sterling takes the prize for the most outlandish idea. In his 2013 book, “Who Killed Shakespeare”, Sterling not only suggests Shakespeare was murdered but was killed by Protestant spies, (Shakespeare being a closeted Catholic) “in order to curry favor with the court”. Sterling seems to have forgotten that Shakespeare’s theater group was called “The Kings Men” because he loved their plays, so killing the King’s favorite author would not be the best way to curry his favor.

Life in 17th century was surrounded by death. Despite the myth that 17th century life was short, the fact is, it was possible to live a long life, if you were lucky. Death could come in many forms: war; disease; (the plague broke out twice in Shakespeare’s life time) poverty; bad hygiene; and religious persecution just to name a few. Yet despite all of this, we know from records that wealthy people with access to a proper diet did live to see old age. So this again makes us wonder, just what did Shakespeare die of? Was it cancer, tuberculosis or god forbid, syphilis?

Let’s take one more look at the diary of John Ward. At first glance his words may sound silly, but records from 1616, the year of Shakespeare’s death, inform us that a new strain of typhus was spreading across England. The name of this mortal infection? The new fever. So yes, Shakespeare may have died of a fever after all. 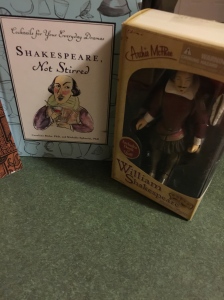 Not all books about Shakespeare are created equal. The motifs and subject matter vary to such a degree that would tax the very soul even the more seasoned librarian. We are familiar with the books that treat the great playwright as the subject matter; these are very easy to catalog, shelve them under biography and be done with it. But these are only the tip of the iceberg.

I bring this up because one of my weekend goals is to gather all my books that have “Shakespeare” in the title and give them a proper shelving. Right now they are scattered here and there with little rhyme or reason. That’s not to say I haven’t made past attempts to shelve them in some orderly fashion. I’ve got most of the books that deal with Hamlet on a nightstand, and my many editions of the 37 plays have been assigned to their own bookshelf which is sadly over crowded and is in terrible disarray. My Arden and Folger editions are fighting for space, while my Yale Complete Works and First Folio smugly look down from their top spot.

How shall we find the concord of this discord? (MSND)

I have books on the authorship question, books on the heavier themes found in the plays such as death and madness, and books that look at the cultural and political settings of Shakespeare’s world(s). Let’s not forget the lighter side too: Shakespeare’s Bawdy and Shakespeare’s Mythical Creatures are hidden between intro to Shakespeare books. Then there are the dictionaries and quotation books, which one would assume would go under the reference heading until you realize all of these books about the Bard are, in one way or another, reference books. I may be over thinking this a bit…

How well he’s read, to reason against reading! (LLL)

You’d think I would refrain from bringing any more books into this fray until I’ve sorted out my problem. In this you would be wrong. Just yesterday I received Cocktails for your everyday Dramas Shakespeare Not Stirred by Caroline Bicks and Michelle Ephraim. While officially a recipe book, there is enough Shakespeare tidbits and trivia to qualify as a reference guide. It is a fun book, not so much to enlighten but to lighten up your mood. How can you not help but giggle at chapters like, Shall I Campari to a Summer’s Day? and Get Thee to a Winery: Girl’s Night Out. The photographs (courtesy of the Folger’s Library) alone are reason enough to see to it that this book doesn’t get forgotten between Shakespeare’s Kitchen and The Skinny Bitch Diet (yes, Shakespeare has even found his way into my cookbook shelf).

The scholarly books seem easy enough. Harold Bloom’s Shakespeare: The Invention of the Human should be near Margorie Garber’s Shakespeare and the Modern Culture as should be Becoming Shakespeare and Shakespeare in America, all dealing with the many ways in which Shakespeare shaped our culture, and to a lesser degree, how we shaped Shakespeare to our liking. But it takes a little bit of mental gymnastics to place William Shakespeare’s Star Wars in this mix.

Good wine is a familiar creature, if it be well used (O)

The smart thing to do would be to make up vague sub-genres and go from there. Or I could just alphabetize them by author or group them by color and make them part of my décor. But it occurred to me on this rainy Saturday that the really fun thing( and possibly sensibly) to do would be to whip up a batch of Rosalind’s Gender Blender and let the problem sort its self out.

In a blender, puree the vodka, lemon sorbet, frozen berries, simple syrup,     and white wine until pink and blue become a purple blur. Pour into heavy wineglass or goblet and top with fresh blueberries.

This is the first in a 2016 series in which I attempt to incorporate into a blog post, and or review, many of my Bard related books.