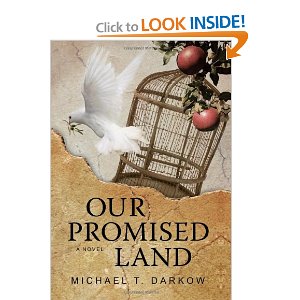 I want to say up front I received this book from Librarything’s Early Reviewer program. Thank you Librarything and thank you Michael Darkow for the book.
Our Promised Land is a novel that centers around the Jewish/Palestine fight over Jerusalem . I do not know a lot about the conflict, but am always looking to books to help me understand. I know that after WWII the UN promised the displaced Jewish people a place of their own. Jerusalem was the land the Jewish survivors wanted despite the fact that Jerusalem was the Palestine homeland. What I do not understand is why this land was promised to the Jews and why it seems the Palestine people were displaced. Many cultures call Jerusalem their holy land, and once again it became a place of conflict because of the UN and Jewish people’s decision to drive the Palestines from their homes. It is confusing because Nazi Germany had just pushed Jewish people from their home; I would think the Jewish people would be more sensitive to the Palestine people. There must be more to the conflict, and I need to read up on it to better understand both sides.
Our Promised Land does not answer any of my questions but it does show the lengths people will go to ensure they have a home, and how war can spiral out of control. Darkow introduces the reader to two main characters; Ellie who survives a Nazi concentration camp and Yasif a Palestinian who  wants peace and travels to America in order to get away from the fighting only to be pulled in when his brother dies after a botched suicide attack. The two mens lives intersect when espionage and double identities pull them together.
The book is short; less than 200 pages. This did not give Darkow enough time to develop the characters so I cannot say I connected with any of them. Some of the scenes seemed rushed while others went on a little longer than necessary and did not add to the plot. I would have like to have learned more about Ellie’s transition from Holocaust survivor to officer in the Israeli Army. As an espionage novel the plot works, though at times it is a little farfetched for me; then again I am not into spy novels so it may have had a normal plot for the genre.  All I can say is Our Promised Land showed me what men will do to call a piece of land home and reminded me that war is fought on many levels. If you like books about war and espionage this short tense novel may be for you. Just keep in mind Darkow does not just write about conflict he asks his readers to think about conflict. This is something we should all do more often.

2 thoughts on “Our Promised Land a Review”