From Karen Maitland’s website: In 2002, I was commissioned by the National Rural Touring Company in Britain to travel for three months from Cumbria to Cornwall with a multicultural show which was performed in rural village halls. My role was to write a book about the tour.
We travelled in winter, often becoming lost in the dark country lanes. Many of the places on the tour were ancient medieval villages, and I wondered what it would have been like to earn your living on the road in the Middle Ages, cold, wet and hungry, never knowing what was waiting around the next bend…
Bad enough in normal times, but during the Black Death when any stranger coming to a village might be bringing the plague, travellers who were shunned by the community would find themselves fighting for their very lives. And so the novel Company of Liars was born… 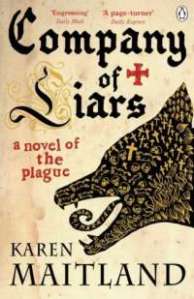 It should be obvious to my readers that medieval history is my passion. It all started when I read about the Black Death back in high school. I have been studying this era for over 25 years. I have problems with historical novel authors who write about the period; many think by using medieval terms and language their books will come across as period pieces. Others may describe the setting as medieval but put modern attitudes and characters into their work. In short, I find most medieval novels lacking. I picked up this one because it uses the plague as a backdrop for the plot. I found the idea of a group of strangers trying to outrun the plague intriguing.
The narrator is Camelot, a seller of specious relics; it is around him that the others assemble. A pair of wandering minstrels from Venice; a magician named Zophiel, angry, sarcastic, judgmental, Pleasance, a skilled midwife and healer and protector of the creepy young girl Narigorm who tells fortunes of death, the young Osmond, a painter and his pregnant bride Adela; and Cygnus the storyteller and who is also called the swan boy as he has one normal arm and a swan’s wing for the other. As they travel one by one is forced to face the secretes they keep. Death takes a good portion of them, but this is to be expected of the period. Many people died tragically, most far too young.
From the very beginning the book hooked me in. I found myself in awe of Maitland’s ability to write about the period as if she is a traveler from the era. With her use of medieval fables, superstitions and attitudes readers cannot but help feeling as if they are truly reading nonfiction. It is hard to put into words how she does this without making this post pages long. The story of the Wedding of Cripples may not be a true tradition yet it sounds as if it could happen. For the first part of the book I thought I had finally found a book I could praise above all others. Too bad the high did not last.
The book quickly became tedious in the middle. Once the group decided to stay in an unfinished church to wait out the birth of Adela’s child, it fell flat. The fighting of the group became a little too much to take, and hearing about their daily activities, which did not change also took its toll. It is hear I started to suspect Maitland had no idea how to finish the book. Though the book is supposed to be a mystery most of the revaluations were anticlimactic; the reader would have figured them out before they came to light. The ending was a complete disappointment and confirmed my suspicions; there was no ending, unless you are a fan of the Twilight Zone. I could very well see Rod Serling smiling at the last page.
This is the first time I have ever said this, but I recommend starting this book, but if like me you start to lose interest, put it down, I promise ending in the middle may be more satisfying than finishing it.

2 thoughts on “Company of Liars; oh how I wish this had a better ending”

What the Basement Said