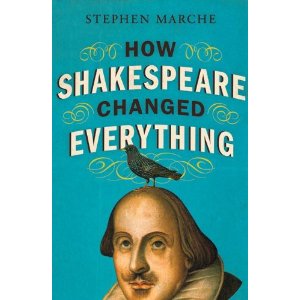 I have loved Shakespeare ever since my high school English teacher acted out Macbeth complete with a one man sword fight. I’ve read most all of he plays, read all of his sonnets (okay this was for a college course), taken two courses devoted to the bard and read many bios.  So when I saw Amazon’s Vine program had Stephen Marche’s new book How Shakespeare Changed Everything up for review I jumped at the chance.
From the product description:
Did you know the name Jessica was first used in The Merchant of Venice?
Or that Freud’s idea of a healthy sex life came from Shakespeake?
In the pages of this wickedly clever little book, Esquire columnist Stephen Marche uncovers the hidden influence of Shakespeare in our culture, including these fascinating tidbits:
Shakespeare coined over 1,700 words, including hobnob, glow, lackluster, and dawn.
Paul Robeson’s 1943 performance as Othello on Broadway was a seminal moment in black history.
Tolstoy wrote an entire book about Shakespeare’s failures as a writer.
In 1936, the Nazi Party tried to claim Shakespeare as a Germanic writer.
Without Shakespeare, the book titles Infinite Jest, The Sound and the Fury, and Brave New World wouldn’t exist.
I went into this book hoping to learn new things about Shakespeare and his work. I was not disappointed. March‘s small book is much more than a trivia book, it is a well written account of Shakespeare’s influence on artists, societies and politics. Each chapter is devoted to a particular way in which our culture has been shaped by Shakespeare. Did you know the reason we have starlings in this country is because a wealthy New York business man wanted to bring all the birds mentioned in Shakespeare’s plays to America. That Othello had a big impact on the Civil Rights movement? March not only offers tidbits like these, he outlines how things happened and why. Shakespeare lovers will look at him in new ways and once again be reminded why he is still regarded as the greatest writer of the Western culture.
I read this in two sitting and found myself wanting to go back and re-read some of the plays. I will say though as a student who spent a lot of time with sonnet 29, I am not in agreement that the lyrics point to a poem about organism. I am not sure how March is reading anything like this into one of Shakespeare’s saddest sonnets. I am going mention this to my Shakespeare professor when I see him next. Or better yet, I think this book would make a great gift. March has given me a lot to think about and a lot to talk about. What better praise for a book?

"It began with a drum. Then the monsters came. I've been hiding ever since."