I’ve been meaning to write this for a few days, but wanted to wait until my emotions calmed down, until I listen to others who do not agree with my thoughts on gun control. But mostly I waited because I’ve been too numb to write. Since Friday I have been in a deep fog, lost in my thoughts and feelings that anyone of the 20 murdered children could have been my own. Now, as my emotions settle down and I am able to research some ideas, I am able to put down into words where I think we are in this country and how we must change.

I grew up around guns. I spent all of my childhood summer living with my grandparents, on their farm in Western Washington State. My grandmother came from pioneer stock; she even remembered the old wagon her family used to come west. Her farm was a working farm. She and my grandfather raised cattle, sold rabbits and exotic chickens geese and peacocks. As a member of the family I learned to handle guns at age 10. We used them to put cattle down, to keep the coyotes at bay and any stray animal that wandered on the property looking for an easy meal.

I learned two important lessons about guns from my grandparents:

If handled properly it only takes one shot to kill something.

Guns are not toys and should be respected as tools of death.

The first lesson was not easy to learn, but mandatory. My grandparents stressed the importance of one clean kill shot, something all hunters and cattle owners strive for. We were never to let something suffer as it lay dying. We had to learn to put something down as quickly and painlessly as possible. The second was easy to learn, when you see the effects of just one bullet, guns loose their glamor and mystic.

As an adult I never did have a gun in the house. Oh, my ex-husband and I talked about getting a rifle when we moved to the country where mountain lions roamed but we decided against it, since the chances of our son accidentally using it was something we could not stomach.  We did not buy into the myth of gun. But now, even as our country advance so many people have, and we live in a country that allows for the ownership of semi-automatic rifles and handguns, something only the military used to have. But why? What is going on in America? Why is the myth of the gun so ingrained in our culture?

The Myth of the Gun

Gun ownership makes people feel safe. This is something you hear over and over again by gun advocates, but statically is not true. There have been numerous studies done on this issue over the last 30 years showing that owning a handgun increases he likelihood of being shot. Here is the most noted study http://www.huppi.com/kangaroo/L-kellermann.htm. This study shows an increase of 2.7% death by a gunshot, but only for homicides. If you include suicides and accidental deaths the likelihood of someone who owns a gun being shot rises to 12%. You may claim to feel safer, but statistically you have increased the chances of someone in your home being killed by a gun.

It’s my constitutional right to own as many guns as I want. Really? Let’s look at who wrote the constitution, the place and the why. First, when the founding fathers wrote up the Declaration of Independence and the Constitution they knew what they meant, and did not feel any need to spell it out for the masses. They found their “truths to be self evident” and implicit. These are the same men who wrote, “all men are created equal”, even as they practiced the harshest form of inequality imaginable. They did not have to spell out who they were talking about, or rather whom they were not talking about. Slaves, women and men who did not own at least 30 acres did not count. This was self evident to the framers of our constitution, as was the idea that all men have the right to bear arms. If we want to take this as a right, written in stone, not to be questioned, then only landowning white men are allowed to own muskets. Anything else is beyond what the founding fathers meant at the time.

This was also written at a time when the fledgling country was at war, and it behooved the government to have ready to serve militias, as we had no formal standing army. Do you seriously believe that had the founding fathers realized we would end up with people banishing firearms in public spheres they would have written such a blanket statement?

If you outlaw guns, only outlaws will have guns. This is a very weak argument yet one we hear time and time again. Yes, it is true, but if we look at gun related deaths in countries in which guns are outlawed we see a vast difference in murder rates. In England there were 60 gun related homicides in 2011; compare that to 12,664 in America. Switzerland and Canada, two countries that do allow for gun ownership only saw 300 and 200 respectively. So why is America’s culture so focused on guns and why do we think they will solve all of our differences?

The myth of the Old West. America was founded on gun violence. We used them on the natives in order to gain control of the continent. We used them on the Mexicans to gain control of what is now Texas and a large part of California. We decimated the bison just for the fun of it (often the carcasses were left to rot, leaving the Natives who used them for food and clothing to starve). Guns quickly became our way of ensuring we had access to large swaths of land for both personal gain and industrial use. The bison were in conflict with cattle, so they had to go, while the Natives would not assimilate so they had to go too! Guns were our ticket to the good life and helped settle the West. We now cling to our guns as a physical way of clinging to our past.  But is the myth of the west based on reality? 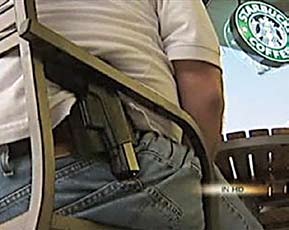 This is a picture taken last year of a guy who is exercising his new right to carry a gun into Starbucks, but would this same guy have the right 100 years ago? NO! This may come as a shock, but the old west had stricter gun laws within city limits than we do! In most Western towns only outlaws would dare bring a gun into town. Everyone else would know to leave his firearms with the Sheriff. The same people who think they are emulating cowboys are in fact only emulating outlaws! Here is an ordinance from of all places, Tombstone Arizona

To Provide against Carrying of Deadly Weapons” (effective April 19, 1881).

Section 1: “It is hereby declared to be unlawful for any person to carry deadly weapons, concealed or otherwise [except the same be carried openly in sight, and in the hand] within the limits of the City of Tombstone.

Section 2: This prohibition does not extend to persons immediately leaving or entering the city, who, with good faith, and within reasonable time are proceeding to deposit, or take from the place of deposit such deadly weapon.

Section 3: All fire-arms of every description, and bowie knives and dirks, are included within the prohibition of this ordinance.”

Notice section 1 notes that you can only have a gun in your hand within sight. This is how you brought them to the Sheriff, or if you were dead set on settling a score, you had to show intent from the moment you entered the city limits. Everyone knew you your intention and it was up to the law to decide whether that intent was justified. But the idea of men walking around with guns strapped to their body is a myth. One based on Hollywood movies and a few wild gunfights between outlaws.

Guns have a place in our society, for hunters, farmers and the military. But we need to stop basing our culture on the myth of the gun. Going out in a “blaze of glory” or “packing heat” for safety should be shunned, not idolized. If you want an assault rife join the military, if you want to truly feel safe, get rid of your gun.  If you feel you need a an assault rifle to feel safe, you are a very bad shot at best, at worst, you are the last person who should own a gun.