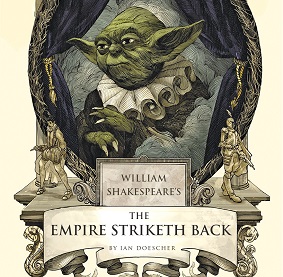 Get thee once more to a Galaxy far, far away

Let me start by saying I’m a Star Wars fan. So much so that I waited until May 4th, Star Wars day to read Ian Doescher’s second installment of his William Shakespeare’s Star Wars series, The Empire Striketh Back. This like his first, William Shakespeare’s Star Wars, was sent to me by the good folks over at Librarything as part of their Early Reviewer’s program. Those who know me well also know I am a student of Shakespeare which is why I wanted to review the series. I absolutely loved the first one, but have some issues with the second.

First let me praise Doescher for not only attempting to adapt Shakespeare for modern audiences but also for his masterful ability to condense an action packed movie into a 163 page book. Doescher manages to capture the excitement of the movie and doesn’t miss a beat as he seamlessly moves from one scene to the next. His use of iambic pentameter in such a skilled manner should earn him praise from poetry fans. Doescher sticks mostly to modern language and rhythm, with a few well known Elizabethan terms thrown in for good measure. Young fans of Star Wars can follow this book without feeling overwhelmed by the poetic style of writing and old language.

One of the Doescher’s more cleaver tricks is giving voice to characters that had none in the movie. Take the Wampa who drags Luke off to his cave, as an example.

Pray know that I a wampa simple am,

And take no pleasure in my angry mood.

Though with great force this young one’s face I slam,

I prithee know I strike but for my food.

Doescher reminds his audience that even the lowest of creatures have feelings and that their actions are not always done with malice. Wampa’s gotta eat too! We hear from the monster, Exogor, the worm like creature whose mouth the Millennium Falcon accidently flies into. He laments that his meal has fled and goes into a soliloquy about being alone.

Yet for all of the fun Doescher brings to the mash-up, I cannot help but be disappointed in his use of Shakespeare’s work and the lack of ties to the plays. What no Henry IV or V battle scene speech?

The back and forth banter between Han and Leia is very much like that we hear between Beatrice and Benedict, yet none of the other characters are nods to Shakespeare. The asides by Han and Leia got a little tiring. Each talk about how they feel about the other. Yeah, we get it. They like each other but are too proud to show it. Star Wars fans already know this and don’t need constant reminders.

Doescher in his Afterward likens The Empire Strikes Back to a Shakespearian inspired tragedy, yet goes on to compare Luke with Oedipus. “Oedipus who learns only too late that his mother is his wife, tears out his eyes after she hangs himself. Luke discovers that Darth Vader is his father just after losing a hand-close enough, right?” No, wrong! How about this? Hamlet is told Claudius killed his father, just like Luke is told Vader killed his father. Luke finds out Vader is his father, just as Hamlet finds out Claudius is his step-father! Both spend a lot of time brooding over these turn of events. Come on Doescher, this was a no brainer. Doescher even has Luke questioning his place in the world and the use of war, yet never do we hear any hint of a doubting Hamlet.

Doescher says he decided to have Yoda speak in haikus. He tells his readers this in the afterwards. I would have liked to have known this before I started reading. Yoda’s odd speech pattern baffled me, and jerked me out of the story. I spent too much time trying to figure out what Doescher was doing. Remember, Doescher is the one who is claiming to do a mash-up of Shakespeare and Star Wars. Sadly, Shakespeare just doesn’t show up enough to make this a true mash-up. Unlike the first book, the references are few and far between. When he does use Shakespeare the lines feel forced, as if Doescher had just remembered he had to add them in.

If flurries be the food of quests, snow on.

The oddest mix of Shakespeare and Star Wars comes right after Vader has entered. He has a conversation with a few commanders and after they leave he unexpectedly goes into a soliloquy that originally was Shylock’s speech, spoken in frustration for his abuse by the Christians.

Hath not a Sith eyes?

If you prick us, do we not bleed? If you

Blast us. Shall we not injur’d be?

While this may delight some Star Wars fans, it had me puzzled. Sure, he may feel abused by the rebels, but it is he who is embarking on a plan to wipe them all out. This famous speech feels forced and out of context to the scene before and after. For true students of Shakespeare Doescher’s use of the Bard’s words may fall flat.

Doescher does remind his readers that above all else this book is written to be fun. And for all the faults I have pointed out, it really is fun. But, if this is a series titled William Shakespeare’s Star Wars, then more care should be given to make proper use of the Bard’s world. To quote Hamlet,”O God, I could be bounded in a nutshell and count myself a king of infinite space…” Come on Doescher, Shakespeare’s world is infinite space, set in a time, long, long ago. Use it, and use it well.

4 thoughts on “Shakespeare & Star Wars? Not so much”