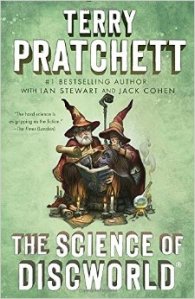 The day the news broke that Sir Terry Pratchett passed away I visited my local library in search of books from the Discworld series with the intended purpose of rereading it. Unfortunately for Carson City fantasy lovers the picking is slim. All together the library has roughly 5 of his books, not counting those housed in the YA section. I picked up Mort and Sourcery (and yes, to all the pedants out there, this is how it’s spelled).

Since my local library wasn’t much of a source I reluctantly visited Amazon. The desire to remain a virtual visitor in Discworld enticed me. (I told myself no more books but well….)Skimming through the many titles and book type options I came across a title that gave me pause; The Science of Discworld by Terry Pratchett with Ian Stewart and Jack Cohen. Normally I would’ve passed on such a tittle as there is a copiousness amount of The …… of Discworld. There is: The Magic of Discworld, The Map of Discworld, the Folklore of Discworld (okay, this one sounds promising) and if I looked hard enough, I would’ve found The Food of Discworld, by Sir Pratchett and Cut-Me-Own-Throat Dibbler (if that last name doesn’t ring a bell don’t try to fake it during a discussion of Discworld, you’ll never make it).

The point is I wanted a story, not a “behind the scene”, “making of” or “you won’t believe what’s in this ‘pork’ pie”. These types of books are for collectors and the gastronomically brave stupid.

What caught my eye about The Science of Discworld was the fact that the two co-authors are scientist writers which led me to believe that there may be more going on in this book than another “making of”. I was right. This is the blurb:

Not just another science book and not just another Discworld novella, The Science of Discworld is a creative, mind-bending mash-up of fiction and fact, that offers a wizard’s-eye view of our world that will forever change how you look at the universe.

In the course of an exciting experiment, the wizards of Discworld have accidentally created a new universe. Within this universe is a planet that they name Roundworld. Roundworld is, of course, Earth, and the universe is our own. As the wizards watch their creation grow, Terry Pratchett and acclaimed science writers Ian Stewart and Jack Cohen use Discworld to examine science from the outside. Interwoven with the Pratchett’s original story are entertaining, enlightening chapters which explain key scientific principles such as the Big Bang theory and the evolution of life on earth, as well as great moments in the history of science.

Scientifically, this is a magical book. For not only do we get a brand new Discworld story, we are offered a lesson in science by way of humor, and the unpacking of what Cohen and Stewart call “lies- to- children.”

Lies- to- children are false statements, but nevertheless leads a child’s mind towards a more accurate explanation. It’s a short cut to the truth. What’s a rainbow? It’s light passing through rain. Why is that cat mad? Because Mr. Schrodinger likes to pull pranks on his colleagues, and small animals.

But as the writers point out, “Unfortunately, what most of us know about science consists of vaguely remembered lies-to-children”. This was a big take-away for me. In my quest to understand why people are prone to believing false statements and easily disproven “facts”, the writers have opened my eyes to the possibility that we cling to the K.I.S.S. (keep it simple, stupid) principal because this is how we were first introduced to science and historical events. Many of us were never told there is more to the story and most of us it seems, are happy to live in a world full of lies.

The book offers readers a chance to grow beyond lies-to-children. Though admittedly at times it is more than a general book on natural science, it’s basically a primer on how the universe works from the atom to the galaxies. Don’t be discouraged if at times it seems a little daunting. The writers are willing to push their readers beyond general knowledge in order to get past simple explanations and our grammar school understanding of the world around us.

In between we are entertained by Pratchett’s narrative: one that pokes fun of science and science fiction. He does this by having the wizards create a universe housed in a bubble (it’s bigger on the inside) and watching as first a solar system is created, then a habitual, yet dangerous planet that no one would want to live on. When Pratchett gets to the evolution of apes, I could not stop laughing:

There was probably something you could do with a stick, he thought. Hopefully, it might involve sex. He poked around the debris and found not a stick but a dried-up thighbone, which had a sufficiently stick-like shape.

He rattled it on the ground a few times. It didn’t do anything much. Then he reluctantly decided it would probably be impossible to mate with at that moment, and hurled it high into the air.

It rose, turning over and over.

When it fell, it knocked me unconscious. (Might have made Arthur C. Clarke’s book more enjoyable if he had written these lines).

Rincewind sighed. He’d seen species come, and he’d seen them go, and this one could only have been put on earth for entertainment value. They had the same approach to life as clowns, with the same touch of viciousness.

Towards the end of the book it is mentioned that more on evolution is coming. It turns out this is the first in a series of four. Sir Pratchett’s last gift to his readers is a series of “Roundworld” books. They are: The Science of Discworld II The Globe, III Darwin’s Watch, and finally IV Judgment Day. I and II are available now. I cannot recommend them highly enough. Thank you Sir Pratchett for more stories, and thank you Stewart and Cohen for not making up lies-to-adults. We tell them to ourselves more than we should.

"It began with a drum. Then the monsters came. I've been hiding ever since."