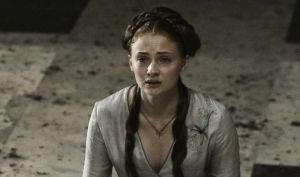 Okay, take a deep breath. We are going to talk about rape, more specifically, TV rape, so if this is a trigger issue, please stop reading now. This is not a post you will enjoy. Come back later, I promise this will not be an ongoing topic. Warning number 2. If you haven’t yet watched Sunday’s episode of Game of Thrones (GOT), stop reading now. The post will be dark and full of spoilers. Still here? Okay let’s do this.

I want to start with this, I want to make it emphatically clear, rape is bad. Whether we are talking about raping a drunken co-ed or serial rape, it’s bad. How disgusted am I with this form of violence? I think everyone who has been convicted should have his dick cut off. Is that clear enough? I don’t think anyone who violently forces himself on a woman should get any kind of pass.

Having said that, I am shocked and confused by the visceral response to Sunday’s GOT episode and find the outrage disingenuous and hypocritical. The level of hate thrown at the writers really has me puzzled. Many people Tweeted that they are going to stop watching the show. Others suggested the writers must hate women, and accused the show runners of being insensitive to women. Most of those who voiced their feelings felt the rape scene was unnecessary and over the top. One woman Tweeted over and over again, “We are outraged because rape was used as a plot point! This led me to wonder if she would have been okay with it, had it been gratuitous, like most of the other forms of violence we see on the show? And over the top? No, from what I saw, the writers dealt with a bad situation as best they could.

If you don’t know what I am talking about let me take a moment to explain. During the last few minutes of Sunday’s episode, after Sansa marries Ramsey, he takes her to his room and makes his servant, Stockholm Syndrome victim, Theon (Reek) watch as he rapes his virginal wife. Viewers do not see the rape, we heard it, but the camera stayed on Theon’s face the entire time. The camera faded to black as we watched Theon cringe and cry. This pissed off a Salon writer, who felt this was an indication that the writers were more concerned about Theon’s feelings than they were with Sansa’s. Ironically, the piece that argues that the focus should have been on Sansa (a woman) used a picture of Tyrion and Jorah (two men) as the header. Didn’t really think that through did you Salon?

As I stated earlier, I was shocked and confused by the outrage. This is what people and some article writers are pissed about? You’d think this was the first time GOT explored the violent side of human nature. It’s not. Here’s a list, off the top of my head of graphic violence viewers have seen:

Men getting their heads cut off

Babies being stabbed in the belly and thrown in the ocean

Two young boys burned alive and strung up as trophies

A prostituted tied and shot with a cross bow (okay, we didn’t actually see Rose get shot but we saw the aftermath)

Theon being tortured week after week cumulating in his dick being cut off.

A girl torn apart by dogs (okay, we didn’t see that either, but we heard it just like we heard Sansa scream).

I think you get the point. This is a very violent show. Yet when the aforementioned list was shown, not much was said. Oh there were a few sniffles and mild comments, but nothing like what we saw after Sunday’s show. Why? What the hell makes this particular violent scene worse that any previous violent act? Why is this worse than seeing babies being killed? Why is this worse than seeing anyone killed? Remember the Red Wedding? A pregnant woman was stabbed and left to bleed to death. Why didn’t those who vow to stop watching the show now, stop then? Was it because these deaths weren’t used as plot points? Because we weren’t forced to watch Sansa reaction? This is something Salon seems to think is an issue. Who the hell wanted to see that?!

The Salon writer, Libby Hill, suggests that because we saw the rape from Theon’s point of view, the show is more concerned about his reaction than Sansa’s. I suggest Hill keeps these two things in mind: we saw a little of Sansa’s reaction when she was being forced on the bed. And unless you’ve seen all of the remaining shows ahead of time, reserve judgment. I guarantee we will see Sansa’s reaction soon enough, and it won’t be pretty.

First, we saw this from Theon’s point of view as a cinematic devise. Theon was a stand in for the audience. His reaction was our reaction. He shared our horror and was used as a means that allowed us to forgo watching the rape.

Secondly, Theon suffers from an extreme case of Stockholm syndrome. He is petrified of Ramsey and allows himself to be abused because at this point, he is not even sure who he is. Being forced to watch as Ramsey abuses Sansa will be the thing that pushes him over the edge, the thing that makes him snap out of it.

Theon is not a sympathetic character. Remember he is the one that had the two boys burned alive and let everyone believe he had killed the two youngest Stark children. There is not much he can do to redeem himself to the audience at this point. The audience, like Sansa doesn’t care what happens to him. But if he avenges Sansa or helps her kill Ramsey, the audience will cheer and forgive him for his past.

And finally, we watched this from Theon’s point of view because the writers knew that this was a touchy subject. It is not that they hate women (and spoiler alert, this is from the books, though a different character is raped) but they understood that this would be hard for women. Though my personal preference would have been to have an implied rape, I think the writers acted as delicately as they could, given the narrative and need for something horrible to happen in order to drive the storyline forward. Like it or not haters, plot points are used to drive a story forward. As horrible as this is, it might be the only thing that would make Sansa align with Theon. Moments before, she said to him, “Do you think I care what Ramsey does to you?”

This scene was no more violent than most. In fact, I’d argue that it was less graphic and jarring than what we’ve seen in the past. I don’t understand why this is worse than anything else GOT has thrown at us, and why torches and pitchfork are being raised. All forms of violence are horrible and deserve our outrage, if they happen in real life. But this is a TV show, and if you are going to be outraged by this, you damn well better be outraged by all of the show’s violence with equal measure.

By the way, you may want see what Sophie Turner, the girl who plays Sansa has to say about the scene http://www.express.co.uk/entertainment/tv-radio/578198/Sophie-Turner-Sansa-Stark-Game-of-Thrones-Black-Wedding-rape

4 thoughts on “The rape of Sansa Stark”