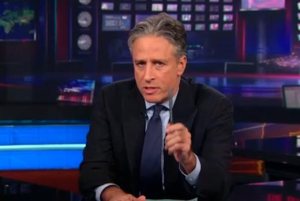 Before Comedy Central became the juggernaut it is today, it was a low budget cable channel called “Ha!”. I don’t recall what I was watching the night I first saw him, but I do remember being taken in by the leather jacket, good looks, and sharp wit. Sometime in the fall of 1993, I fell in love with Jon Stewart. 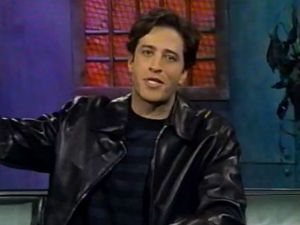 As the years went on, I followed Stewart’s career. When he became the host of “The Daily Show”, I was thrilled, and for 16 years I never missed an episode. But now he is retired, and already I am left feeling the void. Don’t get me wrong, my young crush on him is not why I’m feeling this way; crushes come and go. Rather it is what Stewart did and what he stood for that I will miss. He was the voice of reason when it seemed insanity reined supreme. For many of us, Stewart was the beacon of light in the shit storm created by the media and our government. Through wit and biting intellect, Stewart called out those who tried to sell us bullshit. Now that he is gone, we are left wondering what we will do without our beacon?

In the last few weeks critics have argued over Stewart’s enduring legacy. Some say it is the long list of comedic legends that got their start on the “Daily Show”. Others argue that he created the current face of the news media. That now, many news outlets try to capture the popularity of The Daily Show, while simultaneously keeping a serious news tone. Rachel Maddow admits her show is based on the foundation laid down by Stewart. As much as I enjoy her show, the truth is, the two are nothing alike.

I’d argue that his legacy lay not in what he created, be it the “new” news or new comedic faces, but in what he did. No other satirist successfully lifted back the curtain as far as he did in order to show the world just how human and flawed our politicians truly are. He proved there are no wizards running the State, just imperfect men whose desires are purely selfish. Stewart didn’t just make fun of them, he called them out, and held them accountable. Will Rogers was good for a short zing or two, but he never sat a politician down, looked him in the eye, and asked, “Really, you thought that was a good idea?”

That will be Jon Stewart’s legacy. He, like no other, had the courage to stand up to pundits, politicians, and hucksters. For 16 years we loyal viewers watched as Stewart said what many of us were thinking. No actually, he educated us on how we should think, and on the importance of such thought. Stewart was unintentionally America’s greatest professor of humanities. And like all students whose classroom is now empty, we ask, “What will we do without our beloved professor”?

Stewart answered this question beautifully on his last show. It was his last lesson and the one that we fans should take seriously. He gave us 16 years of unyielding rage against all that would, at worst, tear us apart, at best, try to keep the masses pacified. Stewart taught us that it was okay, nay, it was better for us to question those who would rather we didn’t.

We should honor his legacy by taking his final words to heart. We may not have Jon Stewart to guide us, but we can model ourselves after him. Those of us who watched him because we needed to know there was someone else out there who thought like us, who was our voice, must now raise our own. If we all become our own Jon Stewarts the world will be a better place. If we do this, Stewart’s legacy will become cemented in the American psyche. I can think of no better way of honoring the 16 years he has given us and all that he has taught us.

I give you Jon Stewart’s final lesson; Bullshit is everywhere.

Remember, if you smell something, say something.     You know I will!