“This must be Thursday,’ said Arthur to himself, sinking low over his beer. ‘I never could get the hang of Thursdays.”

For many literary geeks May 25th is a special day. It’s the day Douglas Adams fans show their love by celebrating Towel Day. Why May 25th? Sadly, it’s the day of his death, which happened on this day in 2001. If you’ve never read The Hitchhiker’s Guide to the Galaxy you probably are wondering if you read the first part right. Towel Day? What?? This is because one of the best pieces of advice given in the book concerns every traveler’s basic needs. Of all the things you should always have with you is a towel.

A towel, it says, is about the most massively useful thing an interstellar hitchhiker can have. Partly it has great practical value — you can wrap it around you for warmth as you bound across the cold moons of Jaglan Beta; you can lie on it on the brilliant marble sanded beaches of Santraginus V, inhaling the heady sea vapours; you can sleep under it beneath the stars which shine so redly on the desert world of Kakrafoon; use it to sail a mini raft down the slow heavy river Moth; wet it for use in hand-tohand-combat; wrap it round your head to ward off noxious fumes or to avoid the gaze of the Ravenous Bugblatter Beast of Traal (a mindboggingly stupid animal, it assumes that if you can’t see it, it can’t see you — daft as a bush, but very ravenous); you can wave your towel in emergencies as a distress signal, and of course dry yourself off with it if it still seems to be clean enough.

And yes, there have been years when I’ve celebrated the day by wrapping a towel around my neck; but only when I was sure my employer would not call the men in white coats to come get me.

May 25th has always been a special day for me. The nerd in me would like to point out that the first 6 opening days of the Star Wars series always fell on May 25th. It became a tradition in my family to go out and brave the lines in order to see the movies on opening day. You see, not only were we a hardcore Star Wars family, my birthday just happens to fall on, you guessed it, May 25th.

It’s been a hectic few months leading up to my special day. I did not say so before, but I’ve spent the last couple of months getting ready to move house. I did a lot of purging and boxing up only to come to the shocking realization that we have a housing shortage. Google, Apple, and Tesla are either moving in or expanding so more people are moving into the area than there are houses available. I had no idea how bad it was until I started to look for a place to downsize to. Leave it to me to do things backwards. I should have looked for a new house before clearing mine. For now I stay put, minus a lot of big furniture. At least I have my towels!

This is one of many reasons why I haven’t posted in a while. Just when I declared my finger healed, I hurt it again while packing. Once again it became too painful to type.

Between reality setting in that our area seems to be quickly becoming a mini Silicone Valley and my writing taking a hit, you’d think I wouldn’t have much to celebrate, but you’d be wrong. As crazy as 2017 is turning out to be for us all, I am finding that the second half of year may be something to celebrate on a personal level. I’m finding new professional opportunities are opening up for me. I have a wonderful core group of friends who have been by my side even as I freaked out about our housing crisis and will be with me to celebrate my day. I have wonderful friends all around the world who patiently and good-naturedly cheer me on, offer words of support and comforting criticism. Looking at where I am right now, I have no reason to feel down because no matter what happens on this journey called life, I have a strong sturdy metaphorical towel. I have all of you, and in the end really this is all you really need. 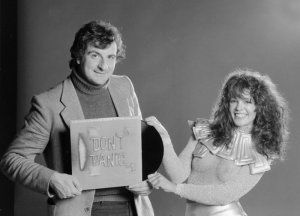 My gift to you today is a list of Adams quotes. His wit will never grow old and I for one will never tire of reading his work. I hope you enjoy it to.

The story so far:
In the beginning the Universe was created.
This has made a lot of people very angry and been widely regarded as a bad move.

A learning experience is one of those things that says, “You know that thing you just did? Don’t do that.”

He felt that his whole life was some kind of dream and he sometimes wondered whose it was and whether they were enjoying it.

I’ve come up with a set of rules that describe our reactions to technologies:
1. Anything that is in the world when you’re born is normal and ordinary and is just a natural part of the way the world works.
2. Anything that’s invented between when you’re fifteen and thirty-five is new and exciting and revolutionary and you can probably get a career in it.
3. Anything invented after you’re thirty-five is against the natural order of things.

2 thoughts on “Happy Towel Day to me!”