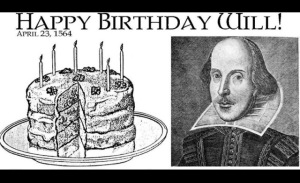 Today we celebrate Shakespeare’s 450th birthday. We do this even though historians are not quite sure this is his date of birth. What we do know is that he was baptized on April 26, 1564. Normally newborns were baptized three days after being born. He died on April 23, 1616, so April 23 is dedicated to the Bard.  And what better way to celebrate his work than with lists?

Harold Bloom, the great philosopher and Shakespearean critic, once said, “Shakespeare invented the human”. I would not go so far, but I would say that Shakespeare invented how we looks at the human condition. His characters are mirrors in which we can all look into and see a part of ourselves. But, be careful how you judge his work. Bloom reminds us, “How you view Shakespeare’s characters may say more about you than it does about him”.

Here is a quick list of some of his more famous humans:

Hamlet has been called the man who could not make up his mind. He is tasked with avenging his father’s death, yet, while having no qualms about killing his traitorous friends, and lashing out with a sword in a murderous rage, he hesitates when it comes to killing Claudius. In act 3, scene 3, Hamlet comes across Claudius as he is praying. Claudius is alone and unarmed. Hamlet says, Now might I do it pat, now he is praying; And now I’ll do’t. And so he goes to heaven; And so am I revenged. That would be scann’d: A villain kills my father; and for that, I, his sole son, do this same villain send to heaven. O, this is hire and salary, not revenge. Hamlet realizes that by murdering Claudius while his uncle prays, his soul may find its way to heaven. This is not what Hamlet wants, yet it is the only opportunity Hamlet will have to dispatch his uncle. Because he hesitates, tragedy ensues. Hamlet sees and speaks to his father’s ghost who informs him of Claudius’ betrayal. Of how Claudius killed him, seduced his widow and stole the crown. The crown that is rightfully Hamlet’s. Yet even as he witness to his uncle’s usurpation, Hamlet needs more proof before he will act. In Act 2, scene 2 Hamlet comes up with a plan that will help him discover the truth. Murder has no tongue, but miraculously it still finds a way to speak. I’ll have these actors perform something like my father’s murder in front of my uncle. I’ll watch my uncle. I’ll probe his conscience and see if he flinches. If he becomes pale, I know what to do. The ghost I saw may be the devil, and the devil has the power to assume a pleasing disguise, and so he may be taking advantage of my weakness and sadness to bring about my damnation. I need better evidence than the ghost to work with. The play’s the thing to uncover the conscience of the king.

Hamlet doubts his own existence, and wonders, what’s the use of it all? He is hesitant when it comes to suicide. He cannot decide whether this is a good idea any more than he can decide if killing Claudius is the right thing to do.

To be, or not to be? That is the question—

Whether ’tis nobler in the mind to suffer

The slings and arrows of outrageous fortune,

Or to take arms against a sea of troubles,

And, by opposing, end them? To die, to sleep—

No more—and by a sleep to say we end

The heartache and the thousand natural shocks

That flesh is heir to—’tis a consummation

Devoutly to be wished! To die, to sleep.

To sleep, perchance to dream—ay, there’s the rub,

For in that sleep of death what dreams may come

When we have shuffled off this mortal coil,

Must give us pause. There’s the respect

That makes calamity of so long life.

For who would bear the whips and scorns of time,

The pangs of despised love, the law’s delay,

The insolence of office, and the spurns

With a bare bodkin? Who would fardels bear,

To grunt and sweat under a weary life,

But that the dread of something after death,

The undiscovered country from whose bourn

No traveler returns, puzzles the will

And makes us rather bear those ills we have

Than fly to others that we know not of?

Thus conscience does make cowards of us all,

And thus the native hue of resolution

Is sicklied o’er with the pale cast of thought,

And enterprises of great pith and moment

With this regard their currents turn awry,

And lose the name of action.—Soft you now,

The fair Ophelia!—Nymph, in thy orisons

In the end all of his doubts just give Claudius time to plan Hamlet’s death. Every major character dies because Hamlet cannot make up his mind. He is so busy second guessing every move he misses major opportunities. In this we can see that often we too are Hamlet. We may never contemplate killing someone, but how often have opportunities past us by because we cannot make up our minds? Sometimes we too feel we have no control over our lives and allow fate to dictate what happens to us.

Lady Macbeth wants more out of life than a mere drafty castle in a Scottish outpost. She and her husband plot to kill King Duncan and take the crown by force. After the deed is done she quickly regrets her actions. The horror of what they have done seeps into her conscious like the king’s blood seeping onto the floor. Yet who would have thought the old man to have had so much blood in him (Act 5 -1). She begins to sleep walk and tries in vain to wash the blood from her hands. Out damn spot. Out I say! (Act 5-1)

She cannot live with what they have done and takes her life. I first read about Lady Macbeth in high school and the two lessons I took from her were:

It has been noted that the more successful we get, the more we lose sleep, the more we are unhappy with our lives. Too our horror we find that money and success do not equal happiness or contentment. We become like Lady Macbeth, and begin to regret all that we have done. She shows us the error of our ways when we substitute power for serenity.

Henry V is a man of action, but it is his words that we hear (we never see the battle of Agincourt) that compel others to war and love. He talks his troops into war and he talks the French princess into falling in love with him. He is a reminder that words are just as powerful as action and that we should be wary of men with silver tongues.

Once more unto the breach, dear friends, once more;
Or close the wall up with our English dead!
In peace there’s nothing so becomes a man
As modest stillness and humility:
But when the blast of war blows in our ears,
Then imitate the action of the tiger;
Stiffen the sinews, summon up the blood,
Disguise fair nature with hard-favoured rage;
Then lend the eye a terrible aspect. (3.1.1) 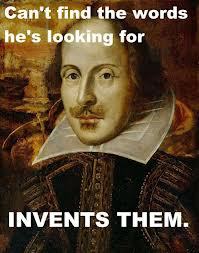 Shakespeare invented 1700 words.. Shakespeare has been credited for inventing single words that normally would have taken several to mean the same thing. I won’t list them all, but here is a partial list of words we use today:

My personal favorite books on Shakespeare:

Shakespeare, the invention of the Human by Harold Bloom

How Shakespeare Changed Everything by Stephen Marche

A Readers guide to Shakespeare, by Joseph Rosenblum (I have been lucky enough to learn at this man’s feet. He is a master when it comes to understanding Shakespeare).

Shakespeare is always referred to as an Elizabethan playwright, but as most of his most popular plays were written after Elizabeth’s death. He was actually more of a Jacobean writer. His later plays also show the distinct characteristics of Jacobean drama.

Almost four hundred years after Shakespeare’s death there are 157 million pages referring to him on Google. There are 132 million for God.

There are only two Shakespeare plays written entirely in verse: they are Richard II and King John. Many of the plays are a mix of verse and prose. The Merry Wives of Windsor is the only play that is almost entirely in prose.

Shakespeare’s shortest play, The Comedy of Errors is only a third of the length of his longest, Hamlet, which takes four hours to perform.

All of Uranus’ 27 satellites are named after Shakespearean characters.