Yesterday marked the 75th anniversary of the publication of T. H. White’s The Sword in the Stone. It was the first in a series of books that would eventual be one, titled The Once and Future King. It is one of my all time favorite books. To celebrate I thought I would offer my readers a short list of:

Things you may not know about The Once and Future King.

The four books, published over three decades are titled:

The Sword in the Stone, The Queen of Air and Darkness, The Ill-made Knight, and The Candle in the Wind. A fifth book, The Book of Merlin was excluded from the compilation. I have a copy of it, and have to admit it is not as good as the first four.

The books start out lighthearted and very funny. As the story progress the tone becomes dark and somber. White said this is how life works; we enjoy our adolescence and innocence and gradually become jaded and disillusioned

Movies based on the book:

The reason for Arthur’s nickname of Wart:

White says Wart was his nickname because it rhymed somewhat with Art, which was short for his name. He is not called Arthur until the very end of The Sword in the Stone. Even Merlin calls him Arthur after he becomes king. White chose a nickname to divide the personalities of the boy and that of the King.

Is Merlin the original Benjamin Button?

Merlin lives through time backwards, making him a bumbling yet wise old man who is getting younger.

What the hell is up with Lancelot’s looks?

In all other romantic Arthurian tales, Lancelot is always portrayed as the best looking, strongest, and bravest of all the knights. White describes him as “ugly as an African ape. His Lancelot is insecure, and self-loathing. He sleeps with Arthur’s wife, and carries his sin on the outside and inside. He seeks to overcome his flaws through full devotion towards becoming Arthur’s greatest knight.

Why the Questing Beast?

The Questing Beast represents the absurdity of knightly quests and serves as White’s way to belittle the notion of the quest as the route to knightly glory. King Pellinore never catches the beast, as this would be end of his knightly purpose. 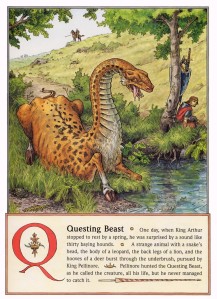 But why should I read yet another book about King Arthur?

White based his books on Sir Thomas Malory’s tales, yet he is more Monty Python than French poet. Here is a conversation between the noble Knight Sir Grummore Grummursum and Arthur’s “uncle” Sir Ector:

Sir Ector said, “Had a good quest today?”
Sir Grummore said, “Oh, not so bad. Rattlin’ good day, in fact. Found a chap called Sir Bruce Saunce Pite choppin’ off a maiden’s head in Weedon Bushes, ran him to Mixbury Plantation in the Bicester, where he doubled back, and lost him in Wicken Wood. Must have been a good twenty-five miles as he ran.”

Merlin to a very depressed Wart:

“The best thing for being sad,” replied Merlin, beginning to puff and blow, “is to learn something. That’s the only thing that never fails. You may grow old and trembling in your anatomies, you may lie awake at night listening to the disorder of your veins, you may miss your only love, you may see the world about you devastated by evil lunatics, or know your honour trampled in the sewers of baser minds. There is only one thing for it then — to learn. Learn why the world wags and what wags it. That is the only thing, which the mind can never exhaust, never alienate, never be tortured by, never fear or distrust, and never dream of regretting. Learning is the only thing for you. Look what a lot of things there are to learn.”

White’s book appeals to young and old alike. Reading it as a child delighted me and made me laugh out loud. No book ever came close to charming me the way White’s did. As an adult I still laughed but found meaning in Arthur’s courtly drama. I’ve read the book three times and afterwards have a hard time picking up another book. There will never be another King Arthur and there will never be another T H White.