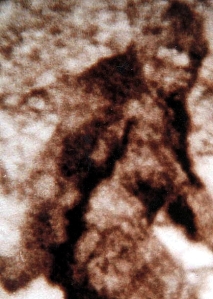 Growing up in Washington State during the 1970’s meant hearing tales about Bigfoot. We “country” people knew the legends to be just that, legends and tall tales, it was the “city” folk who swallowed the stories hook line and sinker. Locals worried about brown bear encounters, visitors asked about Bigfoot sightings.

My grandparents owned a farm an hour from Redmond. The 40 acres  sat in the middle of the King County, which, when I was growing up was in the heart of logging country. My grandparents were good friends with some members of the Snoqualmie tribe. Fred, one of the tribal elders, would use Bigfoot as a way of scaring us kids out of wanting to camp in the woods. When the thought of bears did not scare us Bigfoot’s name was brought up. We knew the wild hairy man was myth, but still…. We never did manage to get the nerve up to camp to far from home.

Of course it is fun to think that there just might be an unknown creature living in the wilds of North America. The idea that something so wild and free can elude modern man is kinda romantic.  Maybe this is why so many people want to believe that there are 8-foot tall bands of primates living in the woods.

Thanks to mass media Bigfoot is alive and well. He sells Jerky ads and is featured in several “reality” shows, most notably “Hunting for Bigfoot”. Thanks to The Discover Channel, gullible people tune in each week as “expert” Squash hunters make fools of themselves as they unsuccessfully try to track down the big guy.

Have you ever wondered how this myth got started? Do you think you know? Thanks to Daniel Loxton and Donald Prthoero’s hard work and dedicated research, we find that the answer is almost as interesting as the myth itself. They co-authored the book Abominable Science; Origins of the Yeti, Nessie and other famous cryptids.  The book is a well researched, well written account of the people and events that shaped our ideas and beliefs about modern monsters.  The pictures and illustrations are of very high quality. These alone could be a reason to pick up the book, but it is the pages of documented accounts of hoaxes and explorations that make this book the definitive book on cryptozoology.  The two authors gather the vast array of claims and stories together in order to show the many problematic “facts” and show readers why they just don’t add up. To give you an idea of how well put-together this book is I am going to offer you,

3 things you may not know about Bigfoot

No, that’s not what they were talking about

Cryptologists point to the long history of Bigfoot sightings by Native Americans.  They love to say that for hundreds of years Native Americans have included Sasquatch in their legends and oral traditions.  The problem with this connection is that the wild man that haunts Native American lore is not the same creature that eludes us today. The Native American Bigfoot legends talk of hairy wild men and women who are human, many can even speak local languages. Some suggest the wild men are super strong and are cannibalistic and vicious. In some accounts, Bigfoot is made of stone and can shoot fire out of his fingers! Some are tall and some are very short. The shy primate like giant is not found in any Native American story.

In 1920 John Burns, an American schoolteacher who was teaching (acclimating) native children became fascinated by the stories he heard while working in Washington State. He is the one who coined the name Sasquatch. It is an anglicization of a word in the mainland dialects of the Halkomelem language. His stories that were recounted in a magazine told of a tall wild Indians, with long hair and who could use fire, wore cloths and used weapons. So how the hell did we get a hairy primate out of these stories?

Well, it seemed like a good idea at the time.

In 1957 the town of Harrison Hot Springs in British Columbia decided they needed some publicity. The Government was giving out $600 dollars to towns that would come up with a project celebrating the centennial. What better project than to stir up tourism? The stunt? Put on a Sasquatch hunt! Use a mostly forgotten local legend in order to bring in tourists and their dollars. The project was rejected by the government, but the ploy was a huge success! Newspapers all over Canada ran the story and soon hunters and newsmen flocked to Harrison Hot Springs. Though the idea and hunt was silly, many started to take the folklore serious. John Burns came to the town to affirm that Sasquatch was human. So again, how did we end up with a hairy primate? No hunter came back with a sighting claim, but one local man did. In short William Roe said, “that in 1955 while hiking in the woods I came across a very large animal that stood about 6 feet tall and almost 3 feet wide. It was covered in hair. As it came closer I noticed it was female! Her arms were thicker and longer than a man’s. When she walked she placed her heel down first. Her head was higher in the back, her nose was broad a flat. The only uncovered area on her body was around her mouth, nose and ears. When she noticed me she turned her head and watched me for a moment as she walked away. This was more animal than man”. The story spread like wildfire, and one man in particular paid close attention to this account.

He wrote about it and then he filmed it.

The account I quoted above should sound familiar to anyone who has seen the Roger Patterson and Bob Gimlin footage. In 1966 Roger Patterson wrote a book titled Do Abominable Snowmen of America Really Exist? In this book he cites witnesses and their stories including Roe’s. A year later he announced he was setting off to find this creature, and lo and behold he did just that! He filmed the exact scene Roe described, down to the heel pattern, female anatomy and head turn! It is not surprising that today’s Cryptologists, when arguing for the film’s authenticity ignore the striking similarities of the two sightings. Patterson never let anyone see the original film footage. He made a copy and to this day the copy is locked away in a safe. He died asserting the film was real, though he made little money off of it. The documentary he tried to make was turned down because no scientist would say the film was genuine. To this day the only people who argue for the film’s authenticity are those who firmly believe in the creature.

For anyone sitting on the fence over the existence of Bigfoot, this should be enough to finally convince him or her that what started out as Native American folklore has morphed for some into a White American symbol for the last remaining piece of the undiscovered country; the last vestige of the untamed North American forests. For others Bigfoot is the ultimate sideshow gaffe, something to fool the masses with. To all those who still believe Patterson and Gimlin caught the legendary beast on camera I can only say that P. T. Barnum was right; there’s a sucker born every minute. Actually, Barnum didn’t say this, his competitor George Hull did. People like Hull and Roe are lost to history, but real showman like Barnum and Patterson live on.

10 thoughts on “3 Things You Didn’t Know About Bigfoot”

I write about monsters. It helps me cope with my BPD. Thank you for reading my work.