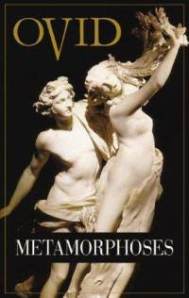 Publius Ovidius Naso (or Ovid as we know him) was born on March 20th 43 BCE, in the small town of Sumo, not far from Rome.  We are told he was a brilliant student who excelled in rhetoric. But rather than becoming a Roman statesman’s as his father wished, Ovid devoted his life to poetry. By the time he was thirty, Ovid had made a name for himself with the publication of his Amores poems. We remember him as the author of Metamorphoses, an epic poem spanning the beginning of time down to his own day. Ovid retooled Roman and Greek myths, giving his readers a comprehensive story of the many interactions between Gods and man, linked together by the theme of transformation or “metamorphoses”. His epic tale was so successful that almost every retelling of Roman and Greek myths since the fall of Rome have been Ovidan myth.

Here is what Penguin Classics has to say about Ovid’s Metamorphoses:

If you are a student of Shakespeare these four quotes may sound familiar. Scholars have said the same things about world’s most famous playwright. The noted critic Harold Bloom went so far as to say “Shakespeare invented what it means to be human”.
It is no coincidence that both writers have been credited for covering such extraordinary ranges of experiences and penetrating the human psyche. Ovid’s grand epic was Shakespeare’s favorite piece of writing. Having only gone through the first three Books of the fifteen that make up Metamorphoses, it is clear to me that Shakespeare was very much influenced by the poem. If we take a step back from the plays we can see there is a running theme of transformation found in almost all of them.
The reason I picked up Metamorphoses was due to its influence on Shakespeare. I wanted to read first hand the stories that enthralled the young boy Will Shakespeare, and if I could find the adult William Shakespeare in them.
Immediately I was pulled in Ovid’s world. Having taken and enjoyed a few university courses on religions I was mesmerized by Ovid’s take on the chaos myth. By the third tale I let my quest for Shakespeare take a backseat while Ovid steered my mind back to a time when Gods fought and loved mankind. When the extraordinary was the norm. 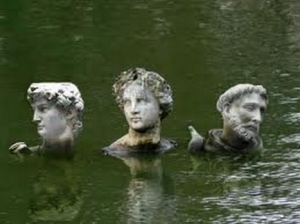 This intro to Metamorphoses is now longer than I anticipated it would be. Instead of talking about two stories, The Flood (Book 1) and Phaethon (Book2), I will just make a brief comment about The Flood and save Phaethon for my next post.

For those not reading along, Jove is furious by a slight made by the human King Lycaön. So in a fit of rage, he declares he will wipe out the entire human race with a flood. Other gods worried about the lack of worshippers “Who will bring to our altars the offerings of incense? Is earth to be left to the mercies of raving wild beasts?” Oh can’t you just feel their compassion towards humanity? Jove declares he will take care of them with promises of a “race of miraculous birth, unlike the people before it”. (In case you are wondering, the creation story included spontaneous generation, something the ancient Greek, Anaximander taught. How else do you get mice in a closed barn of hay?)

What struck me as I read about the flooding of the world was Ovid’s exclusion of scenes of the wicked drowning (Jove says that there are many wicked men) but of the temples and alters slowing sinking and toppling. “…houses and shrines with their scared possessions were swept to oblivion”.

I have to ask, “What is Ovid saying?” Is he making the point that the gods are merciless, that so many had to die because a few offended the gods? Or is he pointing out that faithful worship is futile because the gods do what they want and disregard humanity? Finally, could this be a political comment, Ovid’s attempt to show the destructive nature of conquest?

Ovid grew up during the reign of Augustus, a relative peaceful time for Rome. Yet Augustus greatly expanded the empire moving into the east and west, wiping out indigenous cultures and replacing flooding them with Rome’s beliefs and values. Perhaps Ovid had something to say about this, or perhaps not. For those of you reading along or having already read the poem, tell me what you got from The Flood (there is more to discuss about this story) or if you like any other story from Book 1.

What the Basement Said