We’ll scorch the earth, set fire to the sky

We stoop so low, to reach so high

Ovid begins Book 2 with the tragic story of Phaethon.  This is the longest single story of Metamorphoses and so far the one I have found to be most profound. The story of Phaethon should be read as a metaphor for man’s self-deluded idea that humans can manipulate nature without consequence.

Phaethon, a young man, travels to the Palace of the Sun determined to meet Phoebus and find out if the sun god is in fact his father. Phoebus says he is. To prove it, he will give Phaethon anything he wants, swearing by the River Styx that he will grant Phaethon his wildest dream. The boy’s dream is to ride Phoebus’s chariot. Although his father warns him that no god save him (let alone a human) can control the horses and safely ride the chariot across the sky, Phaethon will not listen. His youthful arrogance allows him to believe he is as mighty as the god who sired him. As soon as Phaeton takes flight however, his excitement changes to abject fear. He realizes that he is not able to control his father’s chariot. As the horses gallop wildly out of control, the earth suffers as the chariot draws nearer. Moisture evaporates, mountain and forest are burned, rivers dry up, and the oppressive heat confines Neptune to the sea. To prevent the entire planet from burning, Jupiter sends loose a thunderbolt that kills Phaethon and drives the horses into the sea.

The young Phaethon is driven to seek his father out because of his desire to be god like. His mother has always declared his absent father to be the sun god, yet his peers mock this idea. Phaethon goes in search of the truth as he is convinced he is the son of the sun, which in Greek and Roman mythology is the source of universal power. He asks to drive the chariot, a metaphor for the sun’s journey across the sky, to prove to all that he is as powerful as his father. Tragically for young Phaethon he learns to late that he is no match for his father. Phaethon comes perilously close to destroying the earth but is killed before he can do so.

Phaethon’s story could be our story. We humans have deluded ourselves into believing we are able to control the reins of nature, even as we scorch and pollute the earth.

In the story the earth looks up at the gods and through the smoke cries out:

Look at my singed hair, look at the ashes coating my eyes and face! Is this the respect that you show me?

Is this the reward for the crops that I yield and the service I render, bearing the wounds of the plough and harrow, harshly exploited and working from one year to the next, supplying the grazing cattle with wholesome verdure, the grains to nourish the human race?

If the earth could talk these may be the very questions she asks of us today. What I find most troubling is that those who believe a god created the universe are usually the ones who believe the most fervently that man has the ability to control and manipulate nature without consequence. Most climate change deniers are fundamental Christians who fervently assert that being sons of a god allows them the right to do what they like with the planet and that their god would never allow its total destruction, even as we see the damaging effects man has inflicted. It never occurs to them that their god like Phoebus can only watch as man uses the gift of free will.

Ovid’s story of Phaethon was a warning to the ages that humans do not have god like powers and that it is folly to even try. Man cannot create beautiful sunrises and sunsets but he can surely destroy the earth from which we watch them on. 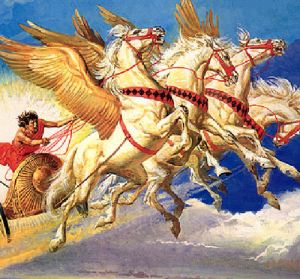