This afternoon while cleaning out old photo folders on my computer I came across this picture. I remember seeing it last year and wrongly assumed it was in England. I put it on my list of places to visit when I arrive in the U.K. and was bummed to find out it is actually in Paris.

Supposedly this is the most famous bookshop in the world. This is because of the high number of visitors it receives annually due to its name and its original owner Sylvia Beach having published Joyce’s Ulysses.

As I sat and contemplated the quaint colorful bookstore I wondered what kind of books I would find in it and oddly-though not real odd to book lovers-what it would smell like? Would it smell like an old musty building or would the smells from the   nearest French bakery have visitors wanting to eat the books?

All this book  pondering took me down a rabbit hole of book related questions. I learned that there are debates going on over the world’s longest and largest books and that some people are willing to spend small fortunes for a chance to own rare books. From all of this, I give you

6 things you may not know about books

Up until 2012, The Klencke Atlas was acknowledged as the world’s largest book, measuring 1,75 meters long and 1,90 meters wide. It takes six people to lift it and two to open it.  Johan Maurits made The Klencke Atlas, which Amsterdam merchant Johannes Klencke presented to Charles II of England upon the king’s restoration to the throne in 1660.The book consists of 37 printed maps encapsulating the geographic and historical knowledge of the time. It is housed at the British museum. In 2012 the book’s classification changed so now it’s the world’s largest atlas.

According the 2012 edition of The Guinness World Records website, the largest book on record now is This is the Prophet Mohamed. The book purports to measure 5 m x 8.06 m and is said to weigh approximately 1500 kg (3,306 lb). The book is a compilation of stories highlighting the achievements of Mohamed and the Islamic influence. All this is according to the Guinness website. I cannot find any other mention of this book. Oddly the one and only picture of this book is not available for copy.  http://www.guinnessworldrecords.com/records-1000/largest-book/

According the 2013 edition of The Guinness World Records website, the smallest book on records is entitled Flowers of the Four Seasons. The book measures 0.74 x 0.75mm. The book is sold as a set that includes an enlarged version and a magnifying glass. Not many who saw it at the Tokyo Printing Museum in 2012 were impressed. Only 149 copies sold.

Now this was interesting research. I wanted to find the longest single volume book on record but found no real consensus on a particular title.  Some arguments held the position that it is world length that counts, while for others it came down to character spacing.

Some argue L. Ron Hubbard’s Mission Earth series was originally intended to be one novel, and by word count (1.2 million) would make it the longest book. But because crazy Mr. Hubbard never said it was one book the title remains with Proust and his 13-volume masterpiece A la recherche du temps, translated as Remembrance of Things Past.  The book contains 9,606,000 characters.

Who Houses the Most Books? 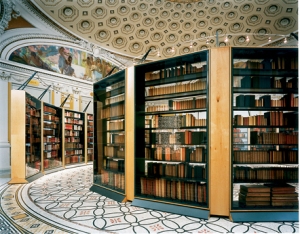 The Library of Congress is the largest library in the world, with more than 155.3 million items on approximately 838 miles of bookshelves. The collections include more than 35 million books and other print materials. Now I know where I want to spend my next vacation! I hope the chairs are overstuffed in well lit corners.

He Bought it for How Much?

The Codex Leicester by Leonardo da Vinci was bought by Bill Gates for 30.8 million in 1994. The book is actually a 72-page document icontaining collections of scientific writings. The journal covers theories on astronomy, water, rock, air, the moon and the heavens.

The Book with the Oddest Origin Story

The Codex Gigas (giant book) or Devil’s Bible now housed at the National Library in Stockholm is famous for two features. First, it is reputed to be the biggest surviving European manuscript. Secondly, it contains a large, full page portrait of the Devil.

Legend says that in 1295 in what is now the Czech Republic an arrogant scribe or monk (take your pick) was to be punished for his sins. He begged to be allowed to create in one single night a book that would glorify the monastery forever. Knowing he could not accomplish the task he sold his soul to the devil. By morning this large volume included the Bible, Jewish history, universal and medical knowledge and local history. The front cover and middle section both contain the same drawing of the Devil. What became of the scribe is never mentioned.

The timing of the legend is unclear but we do know it was told in the middle ages. Oddly, National Geographic did some testing on the book and found that there was only one type of ink used, made from crushed insect nests. The style and font of the calligraphy is consistent throughout, leading the investigators to believe that the manuscript is the work of one scribe rather than many.

And now you know 5 new things about books

8 thoughts on “6 things you may not know about books”