Tomorrow I have a possible opportunity to use my two degrees. I don’t want to jinx my chances, so I am hesitant to speak of it, but as I sat here prepping for it, an idea popped in my head. What if I use what I have just learned to write a list post?

What am I hinting at you might ask? Well, what does one do with both a history and humanities degree? I suppose you could teach or let’s say, work in a State history museum. These are two popular careers paths for someone like me. So without further ado I give you

Things you may not know about Nevada

What did you just say?

It is pronounced “Nev-AD-a,” not “Nev-AH-da, or Na- Vah- Da. Don’t despair if you are a guest of our state and say it wrong. We will just smile and count the days until you leave. But if you are a politician looking for votes, we will run you out of town.

But it’s all desert, right?

Nevada is the 7th largest state yet one of the least populated. As of 2014, we have 2,790,136 residents. There is plenty of room for everyone, except in Las Vegas. Clark County has the highest number of residents in the State (2,027,868) . In the summer the number of tourists are in the thousands. It is an adult Disneyland on steroids.

While most of Nevada is comprised of desert, there are some beautiful green spots. The Sierra Mountain range is breathtaking, although not in the winter (think Donner Party) but if snow is your thing, Nevada has two world-renowned ski resorts: Heavenly and Kirkland.

If ghosts are what you are looking for then Nevada is your state. With well over 600 ghost towns, countless haunted taverns and Inns, Nevada’s ghost population might just well exceed the living. Gold Hill, a tiny mining town of 191 living residents, boasts of having several resident ghosts. Two lost miners and two murder victims are said to haunt the Gold Hill Hotel. More can be found in rental cabins, built in the 1860’s as part of a larger mining camp. Gold Hill has been featured on just about every paranormal ghost show on TV. No wonder the tiny town has managed to keep history alive. Tourists flock to experience a night of spooky entertainment. 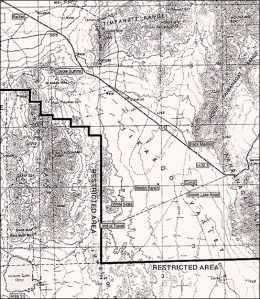 If you happen to look at any Nevada State map prior to 2012, you might notice something odd about a large area right outside of Clark County. 85% of Nevada is owned by the Federal government and most of it is clearly marked as so. So, looking at a map one might think that the large area at the base of the Pahranagat Mountain Range is privately owned, as it is unmarked. The odd thing that may jump out at a skilled map-reader is the lack of topography of any kind. It is as if mapmakers just left this area blank.

Now, the area reads “Nellis Air Force Base”, but you may know it by its common name, “Area 51”. Speaking of maps, don’t ever trust me with one. Someday I should write about my experience of how I found myself at one of the area’s gates.

Nevada entered into the Union on Oct., 31, 1864. In an effort to hasten its admission to the union, Nevada’s entire state constitution was sent to Washington, D.C., by telegram. It is one of the few remaining states that celebrates the anniversary of Statehood as a legal holiday.

Mark Twain lived and worked in Virginia City from 1862 to 1864. Twain left in quite a hurry. There is a story (Twain may have made it up) that he left after challenging a bar owner to a duel. Having out smarted his opponent by tricking him into thinking Twain quite the marksman, he left before the ruse would be uncovered.

Nevada was the first state to ratify the 15th Amendment to the U.S. Constitution, which gave African-American men the right to vote, on March 1, 1869.

Nevada is the fourth-largest producer of gold in the world following China, Australia, and South Africa.

The State bird is the Mountain Bluebird

Carson City is the capitol

Gold was discovered in 1849

Genoa started out a trading post in 1851, and quickly became the State’s first settlement.

The State flower is the Sagebrush.

The State tree is the Bristlecomb

The State motto is “All for our Country”

And now you know a little about Nevada.

4 thoughts on “Things you may not know about Nevada”

What the Monster Said

writing about monsters lets me be myself