You might wonder why, but last night I sat through the two hour Republican debate. Yes, part of me does this out of shear delight in seeing the desperate candidates battle each other the title “Winner of dumbest idea”, but another part of me watches because as a member of our voting society, it is incumbent upon me to know where these people stand on issues and what to fear if one of them, god forbid, actually becomes president.

The subject of last night’s 5th debate was national security or as they tried to sell it, “why we all should be shitting our pants right now”. It was a hard choice: Christie wanted us to fear 5 year old refugee orphans, Cruz and Rubio, (both children of immigrants) wanted us to fear not only those that want to come to our country but also those non-whites already here but who do not have proper documentation. I wish my non-white ancestors asked for the Puritan’s papers..but I digress.

During the debate many of the candidates showed their lack of knowledge on the pre-screened questions. Come on people, you knew they were coming! Christie said he wanted to have a serious talk with King Hussein of Jordan about the King’s possible involvement with terrorists. Yeah, good luck with that Christie, that King of Jordan has been dead for 16 years. Trump couldn’t answer the question of which part of our Nuclear Triad is most important (hint this triad comprises of three types of nuclear bomb delivery systems). Trump shrugged and said, “The nuclear power is most important”. I wish the moderator would have followed and asked him “which delivery system should we upgrade?” just to see him squirm.

As the debate went on (and on) it became clear that while these candidates prided themselves on their ability to sound strong, none sounded particularly smart or well read. And maybe that’s the problem with politicians, they do not have time to read. Which is to bad for if they did, it may expand their worldview. So for the good of the country, I’d like to offer a few of the candidates suggested reading material based on their most egregious debate answers.

Trump: “I would knock the hell out of ISIS and when you get these terrorists, you have to take out their families”.

Mr. Trump, while this may sound like it would keep America safe, in reality it would only inflame and then encourage more hate against America. And then…more innocent Americans would die because of your actions. Besides, being a terrorist’s family member is not always something someone choses to be. The sins of the radical should not be the sins of the family; no matter what the Bible, you’ve clearly never read, tells you.

I’d like to suggest you pick up Salman Rushdie’s 2006, “Shalimar the Clown”. In this wonderful and heartbreaking book Mr. Trump, you will not only come face to face with families of radicalized terrorists, you’ll meet the families that once loved them, the families that mourn them, though they live. You’ll come face to face with those who are personally affected by terrorists on a daily basis, yet retain hope, humanity and love for their fellow man. It is a lesson you so obviously need to learn.

Carly Fiorina: On Putin.“I will not speak to him personally until we’ve rebuilt the Sixth Fleet a little bit right under his nose, rebuilt missile defense program in Poland, right under his nose and conducted a few military exercises in the Baltic States.”

I wracked my brain trying to come up with a book that would best illustrate what her blustering would mean to the world, but then I remembered she liked watching videos (one in particular no one else has yet seen) so my suggestion is “Dr. Stranglove, Stanley Kubrick’s 1964 satire about the wrong person at the wrong time who got his hands on the wrong button. Seems appropriate enough. Come to think of it, this brief synopsis could also work as the plot to a film about Fiorina’s time as CEO of H.P.

Cruz and Rubio clashed about who would be the strongest on new immigration policies. Both were eager to show the other as weak on illegal immigrants, even though at one time or another both favored amnesty for those who are already in our country.

While there are many good books about Mexican immigrants (and let’s face it, these are the ones Cruz and Rubio are fighting about) written by brilliant Mexican writers, I’m opting one written by an American as not to offend their collective sensitive values. T.C. Boyle’s 1995, “Tortilla Curtin” offers a glimpse in the lives and struggles of illegal immigrants trying to make a living in Los. Angels. From the inside jacket: “Mexican illegals Candido and America Rincon desperately cling to their vision of the American Dream as they fight off starvation in a makeshift camp deep in the ravine”. Maybe if these two privileged son’s of immigrants learned about the truly desperate but hopeful lives of those living in extreme poverty they’d learn to lighten up a bit as they discover an America they have never had to experience. Or, maybe we can just send them to Cuba and see who swims back the fastest.

Carson. What can we say about Carson? The man asked for a moment of silence for the California shooting victims only to say “Thank you” four seconds later. What, a brain surgeon who cannot count to 60? On top of that he mispronounced the name of the RNC chairman, Reince Priebus. I concede it may be hard to pronounce if one has never hear it spoken, but as a member of the GOP, Carson surly has had to of heard the name several times. Carson called him “Reince Pubis”. I laughed out loud when I heard this. While many Americans might consider the chairman a dick, I don’t think anyone would call him a pubis, at least not to his face. 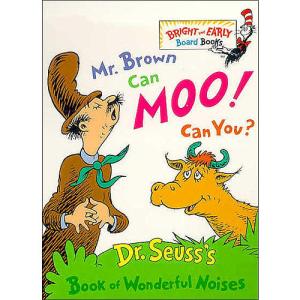 Poor Ben is confused and befuddled. Between not knowing how long a minute is or what to call the leader of his party, it is hard to imagine him reading anything. But then it hit me. Most (okay, all) adult books may be much more than Ben can handle, so why not introduce the perplex doctor to another doctor? I’d like to introduce Dr. Carson to Dr. Seuss. Let’s start him with “One Fish Two Fish Red Fish Blue Fish (I Can Read It All by Myself)” and then work his way up to “ Mr. Brown can moo, can you?” Hopefully these two books will teach Carson numbers and why they matter and a book about proper pronunciation.

If the above-mentioned candidates take up my humble suggestions perhaps the next debate, while not as entertaining, might consist of some semblance of adult content and slightly intelligent ideas. But don’t count on it. From what I have seen these people pride themselves on holding ignorant worldviews and acting uneducated. And that my friends, scares me more than any national “threat” they shout about.

If you have reading suggestions for our candidates, leave them in the comment section. The world will thank you!

One thought on “Suggested reading for the GOP candidates”