It should come to no surprise to my readers that I thoroughly enjoy the stories of Sherlock Holmes in all their iterations. Whether the stories are from Doyle himself or from the minds of modern writers who use the famous sleuth as if he were their own. I loved the playfulness of the Downey/Law movies and the older true to form BBC adaptations. But out of all of them, none has given more pleasure than Steven Moffatt’s take in the Cumberbatch/Freeman Sherlock series. That was until this past weekend, when the four-season run finally came it stunning conclusion. I haven’t been this disappointed and disillusioned in quite some time.

For those of you who have yet to watch season four, I warn you to stop reading now. Yes, there will be spoilers and no, I don’t want to hear how I’ve ruined the show for you. So seriously, Stop. Right. Now. 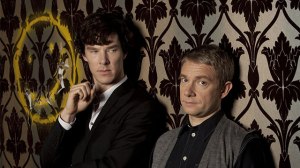 To say this last season (series for my UK friends) has been underwhelming is an understatement. These last three shows have focused on the breakdown of the Holmes/Watson relationship and the one “final solution” that brings them back together. The idea of a break-up between these two best friends would make for good drama had it been done with care; as it was, the last three shows were cobbled together slapdashedly, with major plot holes looming so large that it’s no wonder Watson ended up in a deep well. His watery prison was an ideal metaphor for the series.

In the last episode titled “The final solution” we are asked to suspend disbelief at every turn as Sherlock faces the series’ most villainous foe yet. Among the most absurd plot devices we are asked to believe are:

Mycroft’s super-hero like ability to wipe out Sherlock’s most horrific memories and replace them with memories of a beloved pet dog named “Red beard”. Really? Mycroft has the means to do this? As the head of the government’s spy agency why doesn’t he use this power to wipe out memories of the world’s global terrorist and replace them with memories of a happy Republic? If that’s too much to ask, why not wipe out the mind of the super villain he has locked up in a Arkham like asylum, thus removing the threat all together?

That Sherlock, upon meeting this locked up super villain loses his power of deduction and doesn’t notice the obvious around him. Oh come on! He doesn’t realize the villain is not behind glass or that her voice is being “altered” by a hidden microphone.

That even though Sherlock and Watson show up to the asylum unannounced, the super villain has her traps ready and waiting for them, including a dog bowl with the name “Red beard” on it. This can only mean that Mycroft has talked to her about Sherlock. Again why not wipe her mind too since he has access to her? I don’t think I am going to get over that one.

That we see Watson chained in a well. In fact the writers make it clear that John cannot escape the rising water because of the chain on his leg, yet he is rescued when a rope is thrown down to him. Unless that rope included an underwater diver with a bolt cutter there was no way out for John to excape, but there he is safe and sound. Speaking of John, two episodes earlier his wife died saving Sherlock. Mycroft could have replaced those memories with memories of Mary dying trying to save a puppy from a burning building, thus relieving John of his more horrific memories and saving the duos friendship. At this point I think we can all agree that Mycroft is an asshole. But the most egregious mistake Moffatt and the writers make is with the villain. It’s misogynistic ,and utterly, utterly pointless.

It turns out the most wicked character Sherlock has ever faced is his younger sister Eurus, named for the God of the East wind. We not only learn that Sherlock has a sister he cannot remember, but that Mycroft has teased his younger brother about an “east wind” all his life. See, I told you Mycroft is an asshole. This younger sister is not only smarter than the two brothers (Mycroft says her brilliance is incandescent and that a mind like hers has not been seen since Newton) but that she is a vicious psychopath, lacking all forms of emotion both mentally and physically (Pain? Which one is that? She asks Mycroft). As an adult she subscribes to the philosophy that good vs. bad behaviors are merely societal constraints. She is fully aware of the contradictions of such constraints; it’s deemed bad to murder someone but killing in war is expected. She is also fully aware of the danger she poses as a woman. She answers her own question of “why am I here?”, with the chilling words, “Because I am smart”.

This smart yet very dangerous woman spends the last hour of the episode torturing Sherlock by making him responsible for the death of other people by forcing him to play “games” that can only be solved by murder. She does all of this because though she lacks every other emotion, jealousy is her driving motivation. Jealousy is a trope we see used in literature over and over again as the expression of out of control women. To see it here is madding.

Eurus we learn had no friends and was jealous of Sherlock and his small boyhood companion. So much so, that she drowns this companion in a deep well and sets the Holmes estate on fire, hoping to kill Sherlock. It is at this point that she is locked up for life. There is no attempt to rehabilitate or even medicate this smart yet dangerous woman; Mycroft forbids it. In this he renders her help-less. Wiping out Sherlock’s memory of her effectively kills her. He completes this “murder” by telling his parents she has died in a fire. If this isn’t misogynistic I don’t know what is, yet it only gets worse from here.

In the most mind-bending side plot of the series, Sherlock is a willing victim in his sister’s games in order to save a little girl who he thinks is trapped on a doomed airplane. It turns out, the little girl who really needs saving is his sister, because despite all of her wickedness and psychosis, what she really needs is love from her older sibling. Yes, in the end, Sherlock is able to save her by a goddamn hug.

The episode ends with the family being reunited and all seems well. Yet the viewers are left with a damning question left unanswered. Why is Sherlock’s sister now unable to speak? Though the reasons for her incarceration appear to be gone she is left in the asylum, unable to speak, thus unable to defend herself against those who wish to keep the smart one locked up.

Not only was this a terrible way to end what started out as a brilliant show, it did so in the most misogynistic way possible. I can only surmise that Mark Gatiss, the man who plays Mycroft, and one of the lead producers, is also an asshole. Too bad he can’t wipe out the viewer’s memories of this last episode and replace it with a better one.

7 thoughts on “Sherlock ends with a final misogynistic solution”