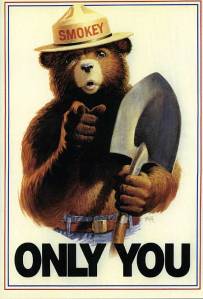 If you’ve grownup in America this picture is very familiar to you. Smokey Bear is one of the most recognizable icons of American culture along side Santa Clause and Mickey Mouse. But how much do you really know about this beloved bear? Today marks Smokey’s 70th birthday, so I give you..

7 things you may not know about Smokey Bear

They call me Smokey Bear!

When the general public refers to him he is usually called “Smokey the Bear”, but this would be wrong. His actual name is Smokey Bear. The confusion began in 1952, when Steve Nelson and Jack Rollins wrote a song in his honor and added a “the” between “Smokey” and “Bear”.

Many believe Smokey’s story started in 1950, when a small badly burned bear cub was found in the aftermath of a wildfire in the Lincoln National Forest, New Mexico. His story made headlines and captivated the country. The young bear was given the name “Smokey” and was used to bolster the image and propaganda of Wildfire prevention. Sadly, instead of nursing him back to health and then releasing him back into the wild, Smokey spend his remaining days as an exhibit in the Washington D.C. National Zoo. After his death in 1975, he was buried in the newly named Smokey Bear Historical state park, near the place of his “rescue”. This is the story the U.S. Forest Service sells in everything from Smokey comic books to school visits by Smokey (minus the zoo encampment part) but this isn’t the truth.

The image of Smokey Bear was first used in 1944, as part of the War Department’s effort to get Americans involved in an anti-terrorism campaign. For reasons never fully explained, the government was afraid our enemies might fly over and start forest fires. The government wanted its citizens to be on the lookout for such fires. As part of their “We must treat them like children” campaign, the government came up with this poster in order to capture the American public’s attention.

In 1962, the National Zoo brought in a female bear named Goldie in the hopes that the aging bear would produce an heir. No such luck. Smokey must of ended up in Goldie’s “friend zone”, because no offspring came of their pairing. An “adopted” son was given to the couple so Smokey could retire. The subject of grandchildren never came up.

He receives how much fan mail?

The living image of Smokey Bear became so popular with American school children he was given his own Washington DC zip code of 20252 in 1964.

In 1984, the U.S. Postal Service created a postage stamp with the image of a small bear clinging to a tree in celebration of Smokey’s 40th birthday. This is the only time the postal service has honored an individual animal.

The campaign’s original catch phrase was “Smokey Says – Care Will Prevent 9 out of 10 Forest Fires.” In 1947 it was changed to “Remember… Only YOU Can Prevent Forest Fires.” Most recently, in 2001, it was again modified to “Only You Can Prevent Wildfires” in response to a massive outbreak of wildfires in natural areas other than forests.

When Smokey was first introduced in recorded media (TV and radio) he did not say anything other than his signature catch phrase. To the disappointment to thousands of children nation wide, when making public appearances he does not talk. Sometimes as he walks away he may utter the line “Remember children, only you can prevent forest fires”. The Forest Service is very clear on this rule. Smokey is not allowed to talk. His “handler” does the talking for him. When working for the Nevada Division of Forestry I found out about the rules of the Forest Service pertaining to Smokey’s use. Only government entities like state forest departments are authorized to use his image.

Smokey has jumped on the social media bandwagon. He has a Twitter handle and his own Facebook page. Here you can find Smokey “talking”, yet on audio media he remains quiet. He gives out silent hugs on Youtube.

From the book’s description:

In the frigid pre-dawn hours, in a distressed Midwestern city, hundreds of desperate unemployed folks are lined up for a spot at a job fair. Without warning, a lone driver plows through the crowd in a stolen Mercedes, running over the innocent, backing up, and charging again. Eight people are killed; fifteen are wounded. The killer escapes.

In another part of town, months later, a retired cop named Bill Hodges is still haunted by the unsolved crime. When he gets a crazed letter from someone who self-identifies as the “perk” and threatens an even more diabolical attack, Hodges wakes up from his depressed and vacant retirement, hell-bent on preventing another tragedy.

Mr. Mercedes is Stephen King’s 57th novel, and is his third attempt to distance himself from the horror/supernatural genre. Who can blame the author for trying his hand at something new? This seems to be a follow up nod to the detective novel; his first being the highly acclaimed Joyland. Unfortunately this one left me, well…. uninspired.

This may sound odd as one would not think of a horror writer as inspiring, but King fans understand what I mean. King has a gift for instilling hope in the face of tragedy. We find everyday heroes, who time and time again, show us what is possible even as the odds are stacked against them. I’m thinking of Glen Bateman, Ralph Brentner, and Larry Underwood who faced with certain death, will not submit to evil. (The Stand) or Jake Epping who teaches us a very valuable lesson on fate and how sometimes memories are what keeps us going. (11/22/63) But in Bill Hodges we are introduced to yet another divorced middle-aged detective. The genre seems to demand that all great detectives be divorced and miserable. For an author who writes characters so compelling and multidimensional that fans talk about them for years afterwards, King’s latest protagonist seems run-of-the-mill. Hodges is tired of life and we can’t blame him. He has nothing going for him save the friendships (even these seem more like acquaintances than true friends) he develops with the small circle of characters King gives us.

Besides the flat characters King introduces us to (flat as in the literary term for character who serves one purpose only) I have two major issues with the book: The plot of the novel and King’s over use of the N word. Both distracted me, and left me wondering what King was thinking as he wrote this novel.

As the description says, Bill Hodges receives a letter from a person claiming to be the Mercedes killer. This person wants to engage Hodges in an on-line conversation. I am not sure why the description says he threatens to kill again because what he really says is he is “done killing,” “I have my memories and they are clear as a bell”. After a long rant about the killing and his concern for Hodges mental state he asks for the detective’s “feedback” and invites him to join in a chat-room. Hodges’ response defies logic, given that he has a forty year career as a cop under his belt. Hodges’ response is to “wind this person up” to the point that the killer decides to kill again! As the story unfolds it is clear that most of what happens is a result of Hodges’ goading. I would be okay with this if at any point Hodges would have admitted this and taken some responsibility for what happens. Even after someone close to him dies as a result of this cat and mouse game (King calls it a fishing game) Hodges refuses to see that his need to close the case is the cause. I would expect this from James Patterson or Jonathan Kellerman but not King. This is an author who, when writing self absorbed characters does so in a way that we the reader realizes the flaw (I’m thinking Jack Torrance in The Shining). We get that part of the character’s problem is his lack of self-awareness, but not in this novel. It is as if King himself does not seem to see the flaw in his plot. The over all message of this novel shouts, “Forget the police, we can solve this ourselves!” stretched credibility. Hodges is willing to risk it all for one last shot at solving a case. Gee, where have we read this before?

I get it, we are all adults and sometimes this offensive term for African Americans shows up in literature. But King’s over-use of the word shook me out of the story. The first time we encounter the word the killer is thinking to himself as he spies on Hodges and his young black friend. The word is used to ensure that we readers become even more uncomfortable with the antagonist, but to use it over and over again to describe a family (and their dog!) got on my nerves. We get it Mr. King, the killer does not like black people, but did you need to keep reminding us of this point over and over again? Instead of drawing a picture of the killer’s mentality it made me wonder why King would feel so free to use the word. Was it a dare? Does he not understand that it is offensive to many even in it’s most casual use? It felt like a gratuitous use of this term and pulled me from the story. This is not something I would expect from a writer like King.

Maybe uninspired is the wrong word. Maybe I should say it is a disappointment. While 11/22/63 remains my favorite book of 2013 and one of my all time favorite books overall, this is the most disappointing books I’ve read in 2014.

I’d love to hear what you think. Have you read it? And if so, what is your take on the plot, the female body count and King’s newest characters.